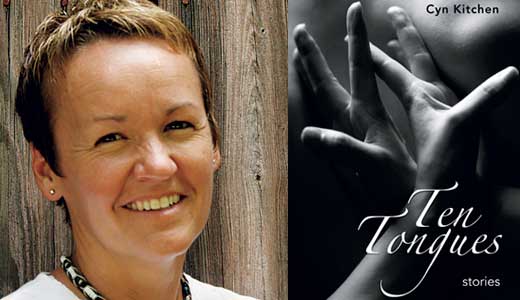 Stoic, humble, plainspoken but polite: accurate characteristics of rural/suburban Midwesterners? Spalding University alumnus Cyn Kitchen’s debut collection of short stories focuses on those people in that setting. She’s often looking at couples who go through trials and tribulations that aren’t too far from the norm — but what the Illinois writer finds and shares is laced with bitterness, shaken faith and occasionally the blackest of humors.

The slim collection is sturdily structured. Its center peak is a concise and lightly caustic portrait of a marriage and home unraveling because of “The Raccoon in the Wall.” The start and finish to the book is a pair of stories centering on church life. In an interesting twist, the church in both cases is not a modest house of prayer: Characters speak in tongues or writhe in reaction to the call to prayer under a revival tent. The eponymous lead-off story pairs a teen girl who’s a lifetime mute — raised by a mother who won’t condone straying outside of her church family — with a handsome young stud who’s both preacher and … wait for it … a ventriloquist. The late-night date between the two is one of several exchanges Kitchen pulls off with a beguiling mix of earthiness, innocence and oddity.

Many of the men in these stories are undeserving pricks. Kitchen gets around to showing reasonable sides of them, but sometimes it requires a bit of strain. I found myself keeping tabs of the same things with each husband and father to come along — whether they hit their women, cheat, let their temper trip them into absurdity, etc. But whether or not there was a checklist quality to the exposition for adult males, there is no doubt about the direction for most couples here. When they aren’t in the midst of parting, they’re still contemplating their parents’ mistakes — as if they must be vigilant to not get caught overstaying in a situation that drains energy and/or the will to move on.

One of Kitchen’s strengths is how she keeps great track of enablers, confederates and detractors. That’s most directly seen in “Ashes Ashes,” which playfully and daintily dances at the edge of sympathy even as the plot becomes claustrophobic and morbid. There’s not a direct correlation between the quality of a given story here and how much it inches toward Southern Gothic. But the least memorable pieces here have plots that don’t veer from the most basic expectations. I hope that next time, she’s taking chances from start to finish.

Cyn Kitchen is coming to town for a reading as part of Spalding University’s Festival of Contemporary Writing, which runs May 14-21. Dozens of authors will take part as Spalding celebrates the 10th anniversary of its successful brief-residency MFA in writing program. Participating authors, play/screenwriters and poets include Sena Jeter Naslund, Silas House and Sheila Callaghan. Events will be held at Spalding’s Egan Leadership Center (Fourth and Breckenridge) and at the Brown Hotel (335 W. Broadway). The full schedule can be found at www.spalding.edu/mfa.