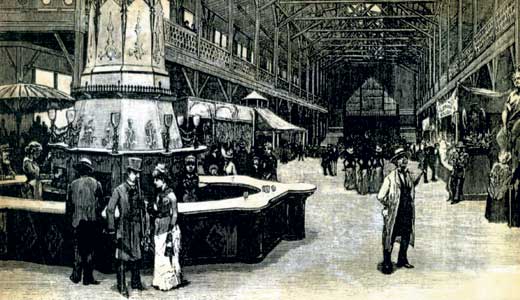 “The past is never dead. It’s not even past,” from William Faulkner’s “Requiem for a Nun,” kept running through my head as I read Bryan Bush’s book on the Southern Exposition. Some of the things that make Louisville the wonderful city it is stem from this event. It existed from 1883-87 in what is now known as St. James Court, Belgravia and Central Park in Old Louisville.

The 45-acre complex had a large main building, with five departments, exhibiting machinery, manufactured goods and works of art, music and literature. President Chester Arthur was in town for the ribbon-cutting ceremony on Aug. 1, 1883. “I now declare that the Southern Exposition is open,” he said, “and may God speed the fulfillment of all the lofty and ennobling purposes.”

The exposition’s effects are felt even into the present day, in Thunder Over Louisville, the National Farm Machinery Show, the downtown bike racks and the Kentucky Opera.

It was open until Nov. 1, 1883, with attendance estimated at more than six times Louisville’s population at the time. Although it was only planned for one year, that kind of success seemed to guarantee the expo would return.

Inventor Thomas Edison had a hand in the Southern Exposition’s success. His company lit the complex with 4,600 incandescent lights bulbs, a feat that took 100 men a month to complete. Many marveled at the exhibit hall’s transformation from night to day. This was not Edison’s first time to Louisville. He lived here in a Butchertown double-shotgun house in 1866-67. Now known as the Thomas Edison House, it highlights his time as a telegraph operator at Western Union as well as displaying his future inventions: film equipment, the phonograph and — most famously — the incandescent light bulb.

Edison certainly was a favorite of the Southern Exposition attendees. Bush tells the story: “When Thomas Edison arrived at the Exposition Hall, he discovered that the power system had broken down. Since his company had supplied the power, he felt a responsibility to get the lights back into working order. He immediately went down to the Exposition Hall’s lower floors and joined the workmen who were trying to put the generator back together. When he fixed the problem, Edison emerged back up to the Exposition Hall, but he was covered in grime; the crowd cheered anyway, and he joined the dinner reception at the Galt House and finished his dinner.”

By 1887, the Southern Exposition had said all that it had to say. Residential development started in the area two years later. A marker that once was located at the entrance of the Exposition now stands in St. James Court.