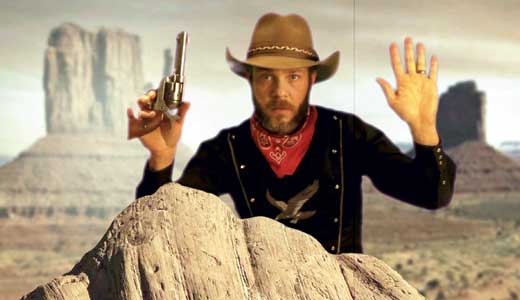 By the time Derby is over, most of us are pretty tired of having to explain ourselves to outsiders. Although there is something endearing and precious about the way out-of-towners look around, amazed to discover that an idiosyncratic metropolis exists in what they previously assumed was a cornfield stretching all the way from D.C. to L.A., there is something almost painful in knowing that while we are compelled to know about them, they can go through their lives oblivious to us. But then again, who are we to blame for the fact that culture ripples from our coastal city centers toward us and not the other way around? What are the material artifacts of our Middle-American culture? The “Young Country” exhibition at the Quonset Hut aims to round up that evidence for export.

The show, which started in Louisville and will travel to the University of the Arts’ Rosenwald-Wolf Gallery in Philadelphia and the Delaware Center for the Contemporary Arts, features artists updating the iconic symbols of rural living: horses, moonshine stills, gospel tracks, tobacco barns. Organized by curator Maiza Hixson, with support from Leslie and James Millar, the show endeavors to depict how young people in the 21st century are redefining what it means to be rural by reinterpreting their legacy as it is embodied in the stereotypes and symbols of rural culture.

One of the themes explored is the role of the artist in Middle America. Matthew Weddington’s “Landmark” succinctly and heartbreakingly documents the challenges of “making it.” It is a photograph of a small highway sign that reads “Fayette County: Home of Matthew Weddington, conceptual artist.” Rather than being reassuring or didactic, the piece is a humorous acknowledgment of something alarming — the fact that many people, especially artists, feel compelled to leave in order to thrive.

Sarah Lyon’s sculpture “30,000 Miles” pays homage to the act of rural exodus and return. The sculpture consists of bronze casts of the motorcycle boots she wore when she crossed the country between 2003 and 2008 to create her female mechanics calendar. The boots are a beautiful play on two competing iconic images: the bronzed baby bootie and the cowboy boot. Lyon’s feminization of the cowboy archetype is both memorable and moving. The subject and material combine to suggest a reading that the journey and subsequent work were in fact, her baby, and that the bronze boots commemorate the act of creation that was her 30,000-mile journey home.

In addition to looking at what it means to stay in the Midwest as an artist, the show looks at reinterpreting the history we inherit as inhabitants of the American frontier. Mel Chin’s “Rough Rider,” a saddle made of barbed wire and steel, looks at the painful reality that was the process of settling the American frontier. Ryan Mulligan’s “Untitled (Native American Getting Recorded)” features an unidentified Native American speaking into a turn-of-the-century phonograph while the electrical cord of the machine wraps itself around the chief, tying him unwillingly to his chair. J.B. Wilson’s “Self-Determination” combines imagery from Native American dancers and unicorns, drawing natural comparisons about the mythology surrounding both.

Other themes touched on in “Young Country” include substance abuse, environmental sustainability, horse culture and regional slang. The works hang together to create a cloud full of meaning ready to rain down elsewhere. The ability to interpret art and read symbols is often a sort of anthropological striptease, and it is my hope that the catalog, prepared by Hixson for future exhibitions, will help unpack the metaphors and images that make the works meaningful for audiences upon whom such symbols may be lost.

Hixson has mentioned there are more works that will be added to the show as it travels, widening the scope of topics that compose the rural discourse. As a historical document, the show is a commendable effort at real-time ethnography and an opportunity to move beyond the stereotypes we come up against when explaining ourselves and our lives to others. This time of year, it’s easy to get caught up in the promotion of the kitschiest parts of our collective identity, but “Young Country” is an invitation back to reality.