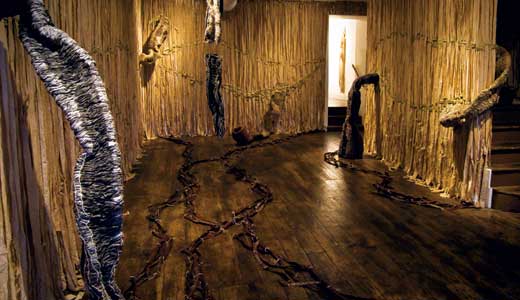 Even before Michelle Amos opened up her new installation at Zephyr Gallery, people were trying to get in. “It took about a week to install, and while I was working, people walking by would stop and knock and try to come in,” she says. It is easy to see, even from the other side of Market Street, why people were interested in getting into Zephyr Gallery to see “Haunt,” Amos’ installation and collaborative exhibition with artist Todd C. Smith.

Amos transforms the downstairs gallery space completely — strips of coffee-dyed muslin cloth covering the walls suffuse the air with an ambiguous organic scent, the stalactite and stalagmite shapes of her woven sculptures undulate and soften the neat corners and sterile walls. Chains of honey locust pods flow over the wood floor planks like silent currents. Her organic woven sculptures, which at times resemble tree trunks, intestines, wasp nests and underwater volcanoes, hang from the ceiling and emerge from the walls, wrapping through the space and suggesting their continuation into the ceiling, the floor and up the stairs.

Inspired by a master class with artist and noted feminist Judy Chicago a decade ago, Amos took up Chicago’s challenge to circumvent the convention that men are associated with technology and architecture, and women with the natural world and decorative arts. Given that prompt, Amos aimed to transform an architectural/urban space into her interpretation of a natural setting — namely, the flooded Ohio River.

Moving from smaller-scale sculptures she made during her time in residency at the Kentucky Museum of Art and Craft in 2010 into a larger installation seemed only natural. “This show at Zephyr really allowed me the freedom to develop the individual works into a full-scale installation,” she explains. Instead of a viewpoint on an individual object, the observer is placed inside the object — a natural evolution of her previous sculptural explorations.

Up the stairs, her sculptural triptych “Ohio River Rising on a Tree Line” sets the stage for the transition to photographs by Todd C. Smith, whom she met while they were in residency in 2007 at the Mary Anderson Center. While Amos’ work is based on the preposition of a flooded river, Smith’s work explores the fantastic notion of a race of men forced to live symbiotically in trees due to flooding. His dark, small-scale photographs, the size of postcards, dot the walls of the upstairs gallery. In them, a dark figure in a tear-shaped sling is illuminated against a forest of naked, winter trees. The figure of the artist silhouetted against the dark background is as beautiful as Vermeer’s pearl earring, the intimacy and mystery emphasized by the unusually high hanging of the work on the gallery walls, which causes the viewer to stand on her toes to see into them.

Eerie and strange, the works, photographed by Natalie Biesel, were taken in secluded locations in Cherokee Park in February and March and offer a compelling contrast to Amos’ work. Cleverly located above her open and enveloping installation, Smith’s challenging, small-scale works stand in contrast to Amos’ in both form and content — like haiku to novel.

Smith, whose work often revolves around the relationship of people and trees, is the yang to Amos’ yin — he is re-imagining the habitation of nature by the masculine in the way Amos is re-imagining the urban transformed by the feminine. Both make compelling and complementary arguments for shifting our interpretation of our surroundings, prompting the viewer to picture a future in which we interact with nature in a more intimate and direct manner.

The artists’ inspiration for the title “Haunt” comes from the dual definition of the word: as a noun, it can mean a place often visited; as a verb, it connotes a person who often visits a place. A solid and successful collaboration by two artists that should not be missed, “Haunt” is an exhibit of both substance and considerable magic.