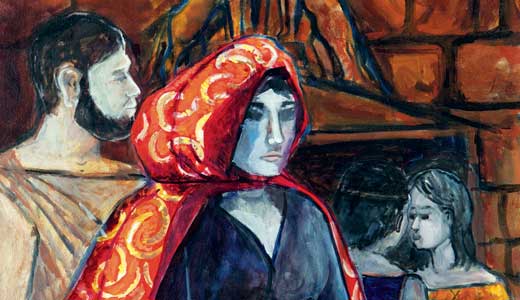 Ann Stewart Anderson’s “Women and War” opens with the diptych “Remains 1” and “Remains 2,” mirror images that show an anonymous ancient Greek woman sitting beside a headstone with a Grecian urn on her lap, presumably containing the remains of a departed soldier, and, beside her, a woman in modern attire holding a folded American flag above a black casket in front of rows and rows of white grave markers. The suggestion relayed by the two works — that war is an altar on which women, who invest so heavily in rearing children, have laid their sons throughout the ages — is the overture to her three-part tragedy, which investigates war as experienced by those traditionally absent from the frontlines.

A seasoned educator, Anderson organizes her exploration of war in the ancient world under three headings: Discord, Strategy and Loss. Anderson begins her discourse by exploring the roots of the Trojan War. The paintings in this section allude to the tale of three goddesses competing for a golden apple offered by Paris, prince of Troy, to the superior beauty. The lead painting strikes a chord about the danger of women in competition against each other, but her depictions of the three goddesses in the subsequent panels partake of well-worn stereotypes. Instead of showing these goddesses actively engaged in the machinations that result in war, they are shown inert, luxuriating in their typical surroundings. Because of their authority, the goddesses would have been aware of their ability to create war; instead of dramatizing their positions of power, Anderson depicts them couched in conventional postures of female powerlessness. The question must be asked: Is the idea that women can be warmongers so uncomfortable that we are afraid to see it depicted at all, even in allegory? If women had the power to make war, would they not then have the power to stop it?

In her saga of Agamemnon and Iphigenia, titled “Strategy,” Anderson demonstrates the full force of her powers as a narrative painter. The images are clear yet nuanced. Her repeating visual motif, the doe, is seamlessly and creatively incorporated into each painting. They are all beautiful. The visual cortex of my brain blushed with understanding and easy pleasure.

In “Loss,” Anderson depicts women from the pages of “The Iliad” flanked by the men they lost to war: Hektor, Priam and Achilles. In contrast to the vivid women, the men are depicted in neutral colors, and the way Anderson captures their faces — flattened and repeated over and over again with only slight modifications — calls to mind the obsessive quality of bereavement. Their small, contained presence clearly marks them as supporting characters to Anderson’s women. While the women are alive, sprawling across the canvases, the men are flat tokens flanking them. This is a dynamic role-reversal: In Anderson’s estimation, victims are at least as important as aggressors, if not more so.

The subjects and narratives are clear and well composed, and the cohesion of the show displays a thoughtful exposition on the role of ancient women in war. Disappointingly, only two of the paintings depict contemporary women. It would have been interesting to see Anderson draw a more explicit relationship between these ancient women and their modern sisters; doing so would have emphasized the theme of the tragic persistence of war throughout the ages. The overall impression is not the tragedy of the act of war upon women, but of their beauty and resilience in the face of unfathomable violence. In reminding us of that fact, “Woman and War” is victorious.