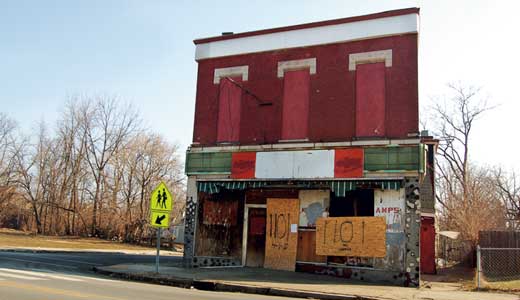 Angela Zito doesn’t have a realtor’s license. She doesn’t possess a degree in city planning, and she’s the first to admit she’s not a formally trained expert on the Great Recession-inspired zeitgeist of urban decay.

But after noticing the state of several abandoned, dilapidated buildings surrounding her daughter Elise’s school, Byck Elementary, the self-described stay-at-home-mom educated herself on the issue of Jefferson County’s 7,200 vacant properties with the intention of not only understanding why, but finding a solution to the problem, as well.

“I — and many other parents and teachers — were concerned about several dilapidated properties near Byck,” Zito says. “My research began with those houses in mind. But my course changed quickly. I found that the problems surrounding abandoned properties form a tangled web. I became intrigued and felt driven to understand every aspect of the problem.”

Hosted by Louisville Metro’s Department of Codes and Regulations, the summit was an unprecedented gathering aimed at addressing one of the most complex and far-reaching issues plaguing post-industrial cities like Louisville, which has hemorrhaged more than 35,000 private-sector jobs in the last decade. At the same time, recent census data depicts a steady bleeding of people and capital from the city-proper to the outlying suburban hinterlands.

Louisville Metro Department of Codes and Regulations Director Jim Mims addressed the audience at Memorial Auditorium, saying the problem is one that involves multiple disciplines ranging from housing to public safety to foreclosure law, and that there’s no quick fix.

“There’s no silver bullet here,” Mims says. “There’s no single cause or single solution. There is no ‘one-size-fits-all.’ The nature of this problem is a problem that goes parcel by parcel, property by property, address by address … (and we’re seeing more of it) in Pleasure Ridge Park, Valley Station, Okolona, Fern Creek and, yes, even deep in the West End.”

Data from the Jefferson County Property Valuation Administrator’s office shows that the result of homeowners migrating away from the urban core to areas beyond the Watterson Expressway has more evenly distributed vacant properties across the county to the tune of 6,684 foreclosures between 2008 and 2010.

To put the issue in perspective, Jefferson County is owed more than $20 million in uncollected local taxes and maintenance violations — just shy of the city’s projected budget deficit of $22 million next fiscal year — as a result of state laws that allow banks and other real estate-minded companies to keep less-than-accurate mortgage records, making it difficult to know who owns the property, much less prosecute them at further taxpayer expense.

In fact, record keeping and bank notification is so lax that, according to Beth Bishop, administrative coordinator for Metro Codes and Regulations, more than half of property owners who are taken to court aren’t even aware that they own the property — and are therefore legally responsible for its upkeep — until they actually get to court.

Much criticism was levied against what Metropolitan Housing Coalition Director Cathy Hinko calls “the privatization of tax liens.”

When a homeowner fails to pay property taxes on time, local municipalities can place a lien (a kind of tax penalty) on that property. State law permits those liens to be sold to out-of-state companies, who in turn stand to collect a cool 12-percent interest — in addition to purchasing the home outright.

Others see the primary issue as one of economic opportunity.

Donna Hunt, chief deputy with the Jefferson County Property Valuation Administrator’s office, has been taking trips into the city’s foreclosure-heavy West End since 2007 and believes a big part of any solution is the creation of employment opportunities in lower-income neighborhoods.

“We definitely need some employment in the West End,” Hunt says. “It’s not fair to have people travel from one end of the county to the other in order to work.”

But for that kind of private investment to take place, the fiscal health of vacant properties needs serious consideration. According to Hunt, a great many of these properties have accrued tens of thousands of dollars in unpaid tax liens and assorted fines, rendering them baggage-laden and unattractive to developers.

Along these lines, the Jefferson County Landbank Authority — a governmental entity established in 1988 to identify abandoned lots for private redevelopment — has not made enough of these properties available. Its board is comprised of three members, each representing a different taxing interest (e.g. Metro Louisville, the commonwealth of Kentucky and Jefferson County Public Schools, which derives funding from property taxes).

“At the end of the day, it comes down to resource allocation,” says Dan Borsch, vice-chairman and state-level appointee of the Landbank Authority. “We have the money to build a $300 million arena, but we have one person that is full time dedicated to working on over 7,000 abandoned and vacant properties. It’s not feasible to accomplish everything that needs to be done with that level of support from the city.”

Borsch says that while the landbank has the ability to “clean the titles” on properties by taking them through the foreclosure process and thus scrubbing them of all residual debts and unpaid taxes, it hasn’t been their focus to do so with the kind of gusto that he and others would like to see.

“We’re an afterthought,” he adds. “The landbank is just a tool. The existing urban infrastructure is not being maintained because there’s no overarching civic plan to develop this city. A well-functioning urban space should have very little need for a landbank authority. As we allow areas of our city to deteriorate, it creates a need for the landbank to go in where the free market has failed and return property to the market.”

Relative to their counterparts in other communities like Flint, Mich. — whose landbank was created to deal with the massive foreclosures and evictions in the wake of General Motors layoffs in the 1980s — Borsch says, “We’re not going to win any awards.”

But Zito remains optimistic; her proposal was warmly received by a member of the Fischer administration, who declined to comment for this story.

“Members of my workgroup seemed highly receptive to the idea,” Zito says. “The summit gave me a renewed sense of hope for change. I believe wholeheartedly that the administration will thoroughly consider all the ideas that came out of the summit.”

Louisville by the numbers

Vacant land parcels with IPL citations as of April 2011: 787