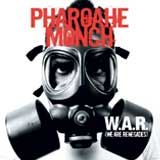 Talib Kweli says he makes music for his own satisfaction, not his fans’. He capitulated and made his last record, Gutter Rainbows, specifically with his listeners’ desires in mind, to excellent results. Pharoahe Monch has never had that conflict, as each album he’s released has fulfilled both his muse and his audience’s demands. While never achieving a crossover hit (“Simon Says” and “Oh No” were mix-show staples), Monch has kept his minimal output (three solo albums in 12 years) to the highest standards possible. He’s hip-hop’s Sade.

W.A.R., his debut for indie label Duck Down, finds Monch hungry, devouring tracks from the Fyre Dept, Diamond D and others, and features Jean Grae, Phonte, Vernon Reid, Citizen Cope and Jill Scott. Highlights are many, from the classic rock of “The Grand Illusion (Circa 1973)” to the fierce title track. “The Hitman” is all plucked bass and funk face amid multisyllabic delivery, too nasty for earbuds. The heartfelt “Still Standing,” recounting young Monch’s struggle with asthma, closes the disc on a triumphant note, ending the 47 minutes all too soon.