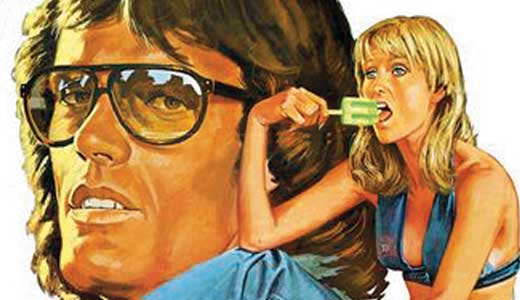 Well, this came and went in a weekend, didn’t it? It’s “real country” — at least in the corny, overblown way that Hollywood sees it — when unstable singing star Gwyneth Paltrow and hard-driving hubbie Tim McGraw set out on a post-rehab comeback tour with hot little Leighton Meester along to warm up the crowd. Problem is, Leighton’s a better singer — and better looking — than Gwyneth, so all sorts of conflicts arise between her, Tim, songwriter Garrett Hedlund, etc. A goofy little potboiler you can’t take seriously. Silly fun.

A nice pair of ’70s auto-actioners, one with a Kentucky connection. Peter Fonda, Susan George and Vic Morrow co-star in “Dirty” inside the real star: a rubber-burning ’69 Charger with every cop in the country in hot pursuit. A classic. Fonda returns for “Race” along with Lara Parker, Loretta Swit and Kentucky native Warren Oates, all packed into an RV, tearing down the highway to escape a pack of bloodthirsty satanists whose ritual sacrifice they witnessed. Both are chock full of terrific chase scenes and bone-crunching crashes. As God intended.

BEHIND THE BURLY Q

Filmmaker Leslie Zemeckis’ account of the art form known as “burlesque.” Once the mainstay of American live entertainment, where many of our greatest performers got their start, it is now remembered more as a sleazy collection of strippers and foul-mouthed comics. A surprising look at a Golden Age that may be heading for a new renaissance.

This subtitled French-language paranormal potboiler may be hard to find but has a lot going for it. A handsome young man, engaged to a stunning woman, is plagued by nightmares that send him to a hypnotherapist. Bad move, dude! There he envisions a forested world of witches and fire. Frightened, he is comforted by Amelia, a sexy blonde who seems to somehow have a connection with his dreams. Worth your time.

A throwback to horror comedies of the ’80s from your buds at Troma. The usual group of young, attractive knuckleheads go on a camping trip, winding up in an abandoned building where a nasty blood-drinking nut job lives. A regional indie, shot in Wisconsin for $6,000. What could be better?

In our continuing crusade to protect the vid-buying public: Danger! This Hallmark Channel Western stars Luke Perry as a circuit judge hot on the trail of the no-good varmints who killed his family. Yeehaw! Spread the word.

The sister doc to Dana Brown’s famed “Step Into Liquid,” focusing on Oahu’s famed North Shore, where world-class surfers risk their lives to compete among skyscraper waves each winter.

This is a difficult flick to categorize. Yes, it seems to be an underground documentary, as the filmmaker follows a 20-year heroin addict who has cured himself with a single dose of the powerful hallucinogen called ibogaine. But from there it takes a weird turn as the filmmaker enters the dangerous subculture of ibogaine users, eventually taking the drug himself to explore its storied ability to “break open the head.” Very challenging.

JIMI HENDRIX & BAND OF GYPSYS: LIVE AT THE FILLMORE EAST

A compilation of all known footage of Hendrix and his legendary “other band” — Mitch Mitchell, Noel Redding, Billy Cox and Buddy Miles — performing at the Fillmore, Jan. 1-2, 1970. Best of all, the sound has been cleaned up and converted to 5.1 surround by Jimi’s original studio engineer, Eddie Kramer. The visuals are rough — much of it from a hand-held black-and-white camera — and the playlist is a scant eight songs, but make no mistake, this is simply the best Hendrix experience we’ve ever seen. Recommended.

SECRET OF THE URN

A good-hearted samurai named Samanosuke is brutally attacked for the sacred urn he carries, losing an eye and an arm in the process. Recovering, he takes on a new identity to recapture the urn. But what’s so important about these ashes? A classic samurai flick from the Golden Age. What more could you want?

THE CHRONICLES OF NARNIA: THE VOYAGE OF THE DAWN TREADER

The third installment in the big-budget C.S. Lewis franchise featuring state-of-the-art graphics and special effects. Lucy, Edmund and their cousin Eustace get literally swallowed up by a painting, landing once again in Narnia, a land where nothing makes any more sense than it does here. There they join the king and a noble mouse warrior on board a magnificent ship for a quest to find Aslan, the golden lion.

THE DISAPPEARANCE OF ALICE CREED

The taut Limey thriller that first introduced audiences to Gemma Arteton (“Clash of the Titans,” “Prince of Persia”). She plays the titular abductee, the daughter of a wealthy man. But as time slips slowly by in her confinement, she seductively comes between her kidnappers, plotting her own course until, ultimately, you begin to feel sorry for them — and very much afraid of her! One good little movie.

TRACY AND HEPBURN: THE DEFINITIVE COLLECTION

We pity the generations of moviegoers who never had the opportunity to experience B&W movies. This set includes nine of the greatest such films ever made, each carried entirely by the intelligence, passion and raw emotion of Spencer Tracy and Katharine Hepburn. They’re all here: from 1942’s “Woman of the Year” to “Adam’s Rib” (1949) to “Pat and Mike” (1952) to 1967’s “Guess Who’s Coming to Dinner.” Amazing films, all wonderfully remastered.