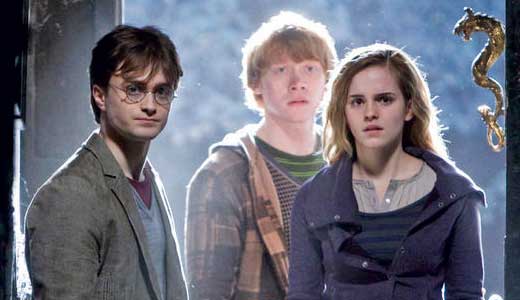 While Harry, Ron and Hermione set out on their own, secretly searching for the source of Voldemort’s immortality, the magical and Muggle worlds teeter on the brink of madness and despair. Of course, all this is but a prelude to the big finish in July. But the filmmakers have chosen scenes wisely, focusing on the three, leaving that great gabbling chorus of grand Limey thespians that is Hogwarts to seek work elsewhere. A dark and welcome addition to the canon. Also available in a “Years 1-7: Part 1 Gift Set” for $70-$135.

Yeah, it won the Best Picture Oscar, which only goes to show what a bunch of crap the Oscars are. Don’t get us wrong, this is a great little movie. But the best movie of 2010? Not bloody likely. Anyhoo, Colin Firth plays Prince Albert, the royal monarch who comes to the throne almost by accident but is afflicted with a stutter that makes it nearly impossible for him to discharge his duties. In walks Major Ham (Geoffrey Rush), a failed actor who must coach the new king on how to sound regal. Lots of truly great acting and plenty of time to go for popcorn.

How can you not love a title like that? Better known as “L’Abîme des morts vivants,” “Oasis of the Zombies” and “Oasis of the Living Dead,” this oft-recycled howler is back again with its cache of Nazi gold, buried somewhere in the African desert, that’s protected by Der Führer’s fleshless finest. Stars Jeff Montgomery and the great France Lomey, who appeared in a number of stellar Euro skin-flicks throughout the late-’70s and early-’80s.

CAPTAIN PLANET AND THE PLANETEERS: SEASON ONE

First DVD release of this ’90s touchstone: a kid’s cartoon show featuring five youngsters from around the globe, gathered together to save the world from bad guys who set the rainforests on fire, etc. In times of Impending Cereal Commercial, they would join together to become the superhero, Captain Planet. A four-disc set, 26 episodes.

Frank Vincent and Kathrine Narducci star (with “help” from Stacy Keach and Armand Assante) in this crime drama about an aging hit man and an old detective, each of whom is hoping to make one last score before retiring.

A just plain awful Jack Black outing that pokes fun at the Jonathan Swift tale. The amazing cast — Amanda Peet, Jason Segel, Emily Blunt, Chris O’Dowd, Billy Connolly, etc. — has little to do besides sit around and watch Jack pee on the tiny buildings. Really. Too crude for kids; too stupid for adults.

A fun Discovery Channel series that reminds us of the old “Junkyard Wars” show. Mike and Geoff Howe are twin brothers who own a business designing and building special-purpose machines. So each week, they have to invent and demonstrate something never seen before. Like what? Like maybe an earth-tunneling rover! Or a 100-mph tank! Uneven, but worth a look.

Big-money Oscar movie that went nowhere. Nicole Kidman and Aaron Eckhart lead a fat-wallet cast for director John Cameron Mitchell, based on a Tony-winning play. They are the parents of a darling 4-year old who dies, leaving them devastated and struggling to cope while relatives and well-wishers complicate their grief.

Part of the “Woodworking with Tommy Mac” series, which was chosen to replace Norm Abram’s “New Yankee Workshop” on KET after Nahhhm closed up shop in 2009. The guy is too hyper for our tastes, but all the more chance he’ll slip and lose a thumb. That’s what we’re all watching for, you know.

SHAUN THE SHEEP: THE BIG CHASE

Yes, we’re once again promoting Shaun the Sheep. Why? Because this clay-animated kiddie-fest is better than 99 percent of anything else that crosses our desks, that’s why! This time, Shaun and his pals are having fun racing. Racing what? Why, everything from bikes to boats to naughty pigs, of course. Recommended, even if you don’t have kids.

A wickedly twisted doc on Miami pot smuggling in the 1970s. Highlights include a redneck pirate, a stoned-out church choir and the longest-serving marijuana prisoner in American history.

The Criterion/Blu-ray release of director Jane “The Piano” Campion’s legendary debut feature. It’s a look at two sisters, one uptight, superstitious and clearly not-all-there, and the other a bullying, self-centered woman with an obvious mental illness. The two are the pride and joy of their parents, even though they all patently resent each other for being so damaged. Don’t sound like a chick-flick at all, does it?