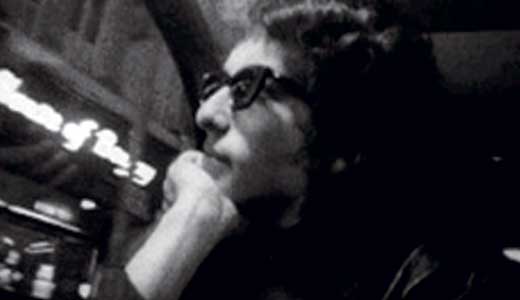 The legendary, groundbreaking film odyssey of Bob Dylan’s English tour in the spring of 1965, now in a Blu-ray/DVD combo pack. An amazingly intimate film of a man notorious for his guarded nature, and a fly-on-the-wall view of an artist at the peak of his talent. Best of all, this film chronicles his last all-acoustic tour. Ever. You will be entertained.

THE OTHER SIDE OF THE MIRROR: BOB DYLAN LIVE AT THE NEWPORT FOLK FESTIVAL 1963-1965

Have you ever dreamed of being there at some critical moment in history? The first moonwalk? Man discovering fire? The invention of movable type? This would be our moment: Bob Dylan at the 1965 Newport Folk Festival. That single performance forever changed American music, from the way it was written to the way it was performed to the way it galvanized and defined a generation. If you can’t imagine what we’re talking about, check out this new Blu-ray release of one of the best music documentaries ever made for TV. Our highest recommendation.

If you’re a fan of short movies and great animation, you need to check this out. Lawrence Jordan created the genre of collage-style animation based on old engravings, religious icons and the like, which Monty Python’s Terry Gilliam turned into a worldwide pop-culture phenomenon. And James Broughton’s masterpiece, “Hermes Bird,” the time-lapse recording of a penis becoming erect (filmed with a high-speed camera developed to record atom bomb tests) surely needs no introduction. More than 12 hours of terrific, adventurous short cinema.

A wacky and lovable South Korean “Jaws”-like black comedy about a man-eating pig. We loved it.

When a group of British soldiers are “demobilized” at the end of WWII, they head back to their former lives but not necessarily their former selves. Two in particular, Limey stalwarts Griff Rhys Jones and Martin Clunes, have spent the war entertaining troops with a ribald stage show, making workaday London seem kinda lame — so they change workaday London! From the TV series, with the late comic Les Dawson.

DON KNOTTS: TIED UP WITH LAUGHTER

The best filmography of the late comic actor we’ve ever seen. You surely know his Emmy Award-winning turn as Barney Fife on “The Andy Griffith Show,” and his later role as Mr. Furley on “Three’s Company,” but how many movies can you name? Did you remember “The Ghost and Mr. Chicken,” “The Incredible Mr. Limpet” and “The Love God?” How about “The Shakiest Gun in the West”? Man, we so need to get a life.

First Blu-ray release of one of our favorite films. Never heard of it? Directed by and starring Alejandro Jodorowsky, it is simply the most fantastic, surreal and mesmerizing flick you’ll ever see. As El Topo (“The Mole”), he plays a gunslinger whose exploits begin in the Old West before sailing off into religious allegory, Dada, avant-garde socialism and grotesquely psychedelic blasphemies — and always to a killer soundtrack! Trust us, this is the good stuff.

The Discovery Channel/BBC’s follow-up to “Planet Earth” and “Life,” this time looking at the relationship between man and the rest of nature. As breathtaking as its predecessors.

MACHU PICCHU AND THE LEGACY OF THE INCAS

A wondrous and mystical journey back to the day when the Incan empire stretched over 300,000 square miles before falling to a disease introduced by Europeans: greed. Specifically, the greed for gold, which swept through their culture, leaving it broken, bankrupt and, uh, something else that begins with a “b.” Careful, you might learn something.

One of those wretched CGI-based monster crapfests that the SyFy channel is always ralphing up. Of course we liked it!

A long-overdue — and surprisingly funny — look at the commercialization of Christianity, the world’s largest industry. And if you think we’re talking just about today’s mega-churches and TV evangelists, think again. It all began long before there was a “Christ” — in many ways forming the very basis of the entire religion. Historical, humorous, absurd and holy — worth a look.

SEX AND THE SINGLE MOM

Gail O’Grady stars in this provocatively titled Lifetime channel movie as a lonely, hardworking single mom whose ravishing and virginal teen daughter (Danielle Panabaker) wants to give it away to a high-school hunk. Mom says, “Good girls don’t” — then winds up pregnant herself! Talk, talk, talk. Happy Mother’s Day!

Déborah François stars in this powerful and provocative French TV drama as a 19-year-old college freshman who’s desperate for money to stay in school. She answers a personal ad “just once” … and winds up hooked on hooking. Very entertaining.

THE PRESIDENT’S BOOK OF SECRETS

What does the president know that, by law, he’s not allowed to tell us? That’s the notion behind this fun doc that explores things like “why do we never see Air Force One’s left side?” And “who has higher security clearance than the prez?” (We once heard a theory that the president always has a gun trained on him in public, to stop him from revealing things he’s not supposed to. LEO uses the same technique on its interns.) From the History channel.

Ed Harris, Jim Sturgess, Saoirse Ronan and Colin Farrell star in this big-budget Oscar bait from Peter Weir. It’s based on the true story of seven men who escaped from a frozen Siberian gulag, 4,500 miles from freedom, with neither food nor supplies. Got one nomination for make-up.