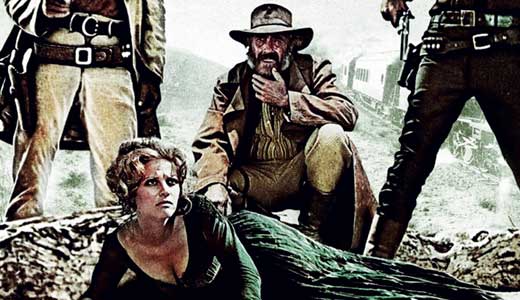 Once Upon a Time in the West

ONCE UPON A TIME IN THE WEST

Simply put: The greatest spaghetti western ever made, now on Blu-ray. With a story by Sergio Leone, Bernardo Bertolucci and Dario Argento, starring steely-eyed killer Henry Fonda and tough-as-nails beauty Claudia Cardinale, and shot in Monument Valley — site of John Ford’s best oaters — the pedigree is undeniable. But tie them all together with majestic wide-screen filmmaking (especially the close-ups), and you have something twisted, unique and wildly entertaining. Trust us, this is a must-own video.

SMILES OF A SUMMER NIGHT

Imagine what it would take for a woman in a Muslim country — considered by her culture and family as little more than brainless livestock — to seek public office. Now imagine what kind of woman it would take to lead the entire nation. That is the story told here in this excellent bio-doc of Pakistan’s Benazir Bhutto.

A real nice indie lesbian romantic drama about a former child actress (Sarah Stouffer, who could pass for 16), now a college freshman, who becomes the sex toy of an aggressive and predatory female professor (Allison McAtee).

A group of young college failures start an older-woman escort service with spicy — if wrinkled — fringe benefits. An overproduced mess of a film that wants to be a coming-of-age dramedy, but whose only saving grace is a winning performance by the always stunning Denise Richards.

FROM PRADA TO NADA

GUY AND MADELINE ON A PARK BENCH

We hate to admit it, but this is one of the most stirring movies we’ve seen in a coon’s age. Imagine one of those old 1940s romantic-comedy musicals, set to a jazz score by Miles Davis — and everyone wears tap shoes! Sound stupid? Well, duh! But it’s also one helluvalotta fun for adventurous film freaks. Gritty, very European and certainly different.

Nobody churns out top-notch TV detective programs like the British. This one reminds us of “CSI,” but instead of forensics, the topic is identity theft — or more precisely, “WHY did this person steal that person’s identity?” Intelligent, brilliantly written and featuring a top-notch Limey cast. Catch it now before some overpaid U.S. TV hack makes a lame ’merican version.

This modern mash-up of teenage martial arts and basketball is a hoot. A young Jay Chou enters the Kung Fu orphanage and leaves as a teen after trashing a disco. But now he’s on a mission to use his lightning-fast skills to play b-ball and find his lost family. Big dumb fun.

A breathtaking bio-drama of Li Cunxin, the dancer considered a national treasure in China, whose defection to America in 1981 climaxed in a 21-hour armed hostage incident in Houston. But that’s only part of the fun, as master-dancer Chi Cao faithfully recreates Li’s extraordinary talent, with help from Bruce Greenwood, Kyle MacLachlan, Joan Chen and others. Extremely entertaining.

MY OWN LOVE SONG

One truly awful drama starring Renée Zellweger, Nick Nolte and Forest Whitaker, with a soundtrack from Bob Dylan’s 2009 album, Together Through Life. Would make the perfect “Howler Party”: You have to take a drink whenever someone in the film says or does something stupid. You won’t last 10 minutes.

A fun documentary on the dumbest “sport” on Earth: synchronized swimming. Follows the travails of the 2004 U.S. Olympic team — most of them high-schoolers — as they dedicate their lives to ridicule, virginity and swimmer’s ear.

Ron Howard’s directorial magic almost meets its match in this screwy rom-com-drama starring Vince Vaughn and Kevin James. The boys do their usual overfed-man-child shtick, which all but sinks the film until winsome Jennifer Connelly pulls it together with help from Winona Ryder and Queen Latifah. Channing Tatum’s in there somewhere.

You can lay this disaster clearly at the feet of Seth Rogen. He’s the one who assembled a good cast — especially Jay Chou as Kato and Christoph Waltz as the bad guy — then hands them a script full of lame sight-gags, lamer action sequences and badly timed one-liners. Even the presence of Cameron Diaz doesn’t help. Just say no.

THE SKULL/THE MAN WHO COULD CHEAT DEATH

A pair of first-rate Hammer/Amicus films from the colorful ’60s in a cheap pairing ON BLU-RAY! “The Skull,” of course, features Peter Cushing and Christopher Lee battling over the skull of the Marquis de Sade. The extended, dialogue-free shocker-finale has never been topped. And “Man” stars Anton Diffring as a surgeon who finds the key to life eternal, but at a terrible price. He’s admirably assisted by Christopher Lee and the beautiful Hazel Court. Recommended.