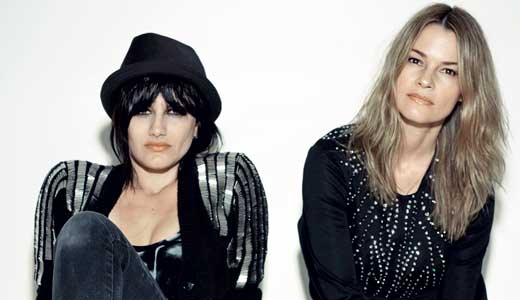 Consider Uh Huh Her the Joan Jett of today. After being dropped from their label more than a year ago, the duo — Camila Grey, former member of Mellowdrone, and Leisha Hailey, former member of The Murmurs and star of “The L Word” (Alice Pieszecki) — didn’t stop the music. Instead, they forged ahead and started their own label — Plaid Records — essentially taking complete ownership of their music, image and merchandise. “We knew we had another couple records in us, and I’m not one to really quit,” Grey tells LEO. “In the face of a problem, I really want to solve it and move forward. And that’s what we did.”

Uh Huh Her, who stops by the Southgate House in Newport, Ky., on Monday, will play songs off their new Black and Blue EP and give the audience a taste of their upcoming Nocturnes full-length. Grey tells us more about the new sound, the future and
the fans.

LEO: You’ve gone through some changes since your last album, Common Reaction. Tell me what happened.
Camila Grey: Well, basically we got dropped and kinda had to start from scratch. We let go of our managers, too, so we kinda did a complete refurbishing of our team. The old way wasn’t working, so it was out with the old and in with the new. We decided to take matters in our own hands and finance, produce and record — do everything as far as the second album was concerned. We found an amazing co-producer, Wendy Melvoin (Prince and The Revolution), who has a multitude of credits under her name. She took us under her wing, and we were able to record at Henson Studios in L.A. and really make an amazing record.

LEO: What are some things Wendy suggested?
CG: As a co-producer, I tend to be a control freak when it comes to production, and she kinda made me let go of old ideas. She made me explore new territory. And she’s very inventive. She’s a genius. She added percussion … she helped us do those things you normally don’t get to do with a small budget.

LEO: Is your sound different now?
CG: (First EP) I See Red I produced and made on my own — nobody helped us. It was really lo-fi, indie rock. I think people really dug it. And when Common happened, it was like we were now on a label and had a slick producer who’s going to make everything sound glossy. It’s not a bad thing, but it was a bit of a departure for us. So on this new record, I wanted to take back control and produce something that was heartfelt and organic and lush and beautiful. On Nocturnes, I was blessed with time and amazing facilities to work in. It’s certainly a lot bigger — it’s a big rock album. With the EP, we went into a more dance-y, more energetic direction.

LEO: How are audiences reacting to the new material off Black and Blue?
CG: I think they’re digging it. It’s a bit more up-tempo than they’re used to. I think there’s a little more energy happening.

LEO: “Never the Same” off the EP is one of those heartbreaking, I-want-you-back songs that shoves a dagger through my heart every time I listen to it. How did that one come about?
CG: I think everyone can relate to that! It was an old song we recorded for Nocturnes. We kept playing it for people, and they were like, “Eh.” I revisited it for the EP and added in a little more synth-y element to it. It was as simple as that. We made the EP in a week and a half. It was pretty crazy, but it was great because it enabled us to see that we can really do something cool in no time, on our own. We pat ourselves on the back for that one.

LEO: What’s your writing process like with Leisha?
CG: It depends. Sometimes we’ll write together, sometimes I’ll write something. I’m weird in that I like to write and produce something from start to finish in one fell swoop, because that’s how my brain works. I’ll do that and go to town, and she’ll come in and say, “Oh wow, you just already made that song.” Sometimes she’ll come in with a song, and I’ll take it and produce it. I think we finally hit our stride with writing, and now we know how each other works.

LEO: Does it bother you if people show up just to see “Alice”?
CG: It bothered me initially. I’m such a musician, and I’ve always been in bands — I’ve never had an actor in my band — so it’s always been about the music for me. That being said, she’s a huge musician. Before the acting career, she was in The Murmurs. She certainly has a following, but I just hope if they come to see her or because of “The L Word,” they leave a fan of band. It’s a good thing — you just have to get over the “Alice!” screams.