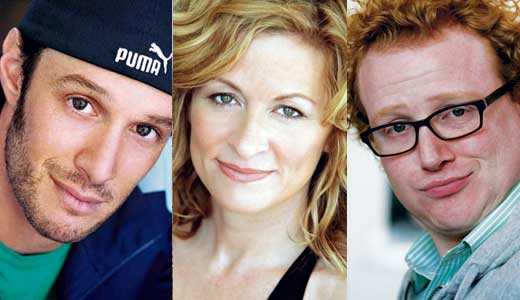 Sarah Colonna, Brad Wollack and Josh Wolf are some of the hottest writers and stand-up comedians in Hollywood. All three, however, are better known for their regular appearances on E!’s “Chelsea Lately” and as the stars of the spin-off pseudo reality series “After Lately” (Wolf appears sporadically). With comedian Chelsea Handler as their fearless leader, “The Comedians of Chelsea Lately” have been dominating the comedy industry for the past couple of years. Colonna, Wollack and Wolf will be appearing together this weekend at The Improv.

LEO: Do you remember your first time on stage?
Sarah Colonna: I do actually. It was in 1999 … like the spring of 1999. So it was a long time ago, for sure. It was at a place called The Icehouse, in Pasadena, Calif. It was really, really, really scary. My dad lived in California, so he brought out a bunch of friends, and a lot of my friends came, too.
Brad Wollack: Yes. The first time went really, really well. The second time went really, really well. Third time bombed. All three were at The Improv here in Hollywood.
Josh Wolf: The first time I was on stage, it was in Massachusetts at a place called the Iron Horse. I was 16 years old and my parents had to drive me there. And I talked about my parents farting the entire time.

LEO: Do you prefer performing live or in front of the camera?
SC: I love both. I would definitely say … I love stand-up so much more now than I ever have, because there is a whole different world that has opened up from being on this show.
BW: I think both have their challenges and their rewards. The obvious reward for performing live on stage is the immediate feedback, and it’s a pretty great rush to get a room full of people laughing collectively. And the ability to do the “After Lately” stuff is pretty cool, too. It’s flexing a muscle I never knew I had … like most of the muscles on my body — thoroughly nonexistent until I stretch them.

LEO: What’s your writing process like?
JW: Honestly, I do my best writing in the shower. It’s something about the white noise that clears everything else out of my brain. So I end up talking to myself in the shower.

LEO: What was the best piece of advice you ever got?
SC: Honestly … this is going to sound really cheesy. But it was from my mom when there was a bit of a rough patch. And I got a card in the mail that said, “This is what you always wanted to do. This is what you’re doing. It takes some time, but just stick with it, and it’ll pay off.” And that was it. I think it’s the best advice I’ve ever gotten.
BW: I’ve gotten a lot of good advice. But Chelsea subscribes to a theory — she didn’t really give me the advice, but she’s living proof of it — just create your own path in life. You have to have a belief in yourself that you know what you’re doing, and that you have something unique to offer. Typically, the more people say “No,” the more right you are. I mean, within reason. If people say, “No, don’t go blow up a building,” they’re right.
JW: Don’t be scared to fail.

LEO: Now that you’re successful, what’s the best piece of advice you could give?
SC: Umm … almost the same thing. I think the best advice would be, if you think you really wanna do it, double check with yourself that it’s not just about, “Oh, I wanna be on TV” and that’s it. Make sure something is in you that goes, “I really think I can put up with this.” It’s an uphill battle, for sure.
JW: Don’t be scared to fail.

LEO: Of the three of you, who’s funniest?
JW: Funniest looking? You know I can’t answer that question.
SC: Umm … definitely me.
BW: Oh, well, undoubtedly me … but I’ll let them have their moments.

LEO: Will we ever see Josh Wolf without a hat on?
BW: He would like you to see him without a hat on, but he doesn’t know how to retire the hat. It’s become such a part of his persona now — the hat lives on his head. It does make him look younger, I will tell you that.
SC: You don’t want to. I’ve seen him without his hat on — his hair is a fuckin’ mess. Everyone thinks it’s because he’s balding, and he’s not balding — he’s got more hair than anyone I’ve ever seen in my life. I don’t know what he did in a former life to end up with that head of hair, but obviously it was bad.
JW: Google it.

LEO: What’s been the single greatest moment in your career up to this point?
BW: It probably wasn’t something going on in my career, it was probably the residual effects of my career. And I think the most exciting thing for me — I was at dinner one night near my home. I turned around and there was Paul Pierce of the Boston Celtics. He was eating dinner with his wife, and they waved at me. That was kind of a surreal moment. It’s like, holy shit, these people I watch and admire for whatever they do, and they know who I am. That type of stuff is surreal.
SC: I think opening for Chelsea at Radio City Music Hall. It’s such a legendary place … yeah, I cried all day before I did it. Luckily I didn’t cry onstage, but for a minute, I thought I was going to. I think that’s the coolest thing, because I was with my friend who I had known all these years … she sold out the show, and I’m there with her.
JW: One would be the stage at Radio City Music Hall, which is pretty amazing. The other is the tickets to sports games I get for free. I’m such a sports geek. It’s almost better than a paycheck for me.