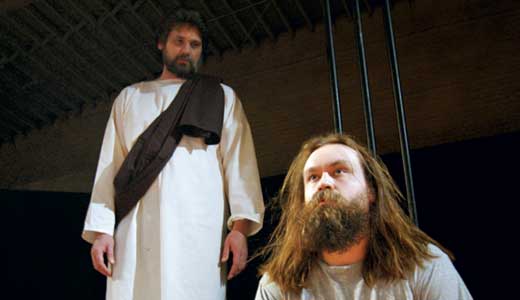 The Last Days of Judas Iscariot
An Alley Theater production. Directed by Todd Zeigler. Continues through April 30 in the Alley Theater/Art Sanctuary at The Pointe, 1205 E. Washington St. For tickets or info, call 713-6178 or visit www.thealleytheater.org.

I suppose there are quite a few people who are obliged to see “The Last Days of Judas Iscariot,” the 2005 play by Stephen Adly Guirgis that opened last weekend in an Alley Theater production directed by Todd Zeigler. Who are those people? Relatives, romantic partners and devoted friends of the play’s cast and crew.

In addition, there may be a few people who might attend voluntarily: those who take perverse pleasure in terrible writing; those who believe that, in penance for some past sin, they should submit themselves to three hours and eight minutes of sophomoric, repetitive dialogue masquerading as a profound exploration of “deep thoughts”; those who find themselves trapped inside the theater without an umbrella or any form of transportation during a terrific rainstorm.

The premise makes an interesting blurb, since the play proposes a provocative, contrarian twist that might seem a bit subversive, especially around the Easter holiday. Set in Purgatory, “The Last Days” is in the form of a courtroom drama that tries to answer the religious and philosophical question: Does Judas Iscariot deserve eternal damnation, or is he worthy of redemption? To shed light on this question, witnesses like Satan, Sigmund Freud, Pontius Pilate, Caiaphas the Elder, Mother Teresa, various saints and apostles, are summoned to the stand.

Alas, the blurb is far more entertaining than the play itself. Rather than plunging smartly into the ideas the premise might imply, Guirgis creates a mix of melodrama and sketch comedy that relies on cheap tricks in a desperate attempt to garner a few even cheaper laughs. Mostly he does this by filling the mouths of saints and apostles with plenty of foul language — a device that’s effective the first few times it’s employed (did I mention this play runs three hours and eight minutes?).

Zeigler and his cast seem to have embraced the concept with gusto, and the result is many of the saints, sinners and apostles wind up sounding like refugees from either “Jersey Shore” or “The Real Beverly Hillbillies.” Come to think of it, if you had three hours and eight minutes to spare, catching up with the comic ethical conundrums faced by Snooki and The Situation might be more entertaining than watching Saint Monica (Madeleine Miller) tease Judas with a series of jokes about suicide by hanging.

Are there good performances to be seen? Perhaps. In this version, Zeigler and cast have opted mostly for one-note, over-the-top caricatures that would entertain in small doses, but become brutally dull over the course of the play. Qualified kudos for their noble effort in a losing cause go to Tony Smith, for his feverish portrayal of the prosecuting attorney, and Fabiana Aziza Cunningham, for eking out a bit of emotion when her effort in the defense goes awry. The best acting comes in short bursts from the witnesses, especially from John Hetzel, who injects Caiaphas with a wonderfully creepy presence, and Jon Adams, whose Satan has a sleek, sinister physicality.

The timeless protocols of theater criticism preclude spoilers, so it would be out of order to reveal the jury’s decision. But I will say this: If ever a play could be said to be unworthy of redemption or revival — it’s this one.