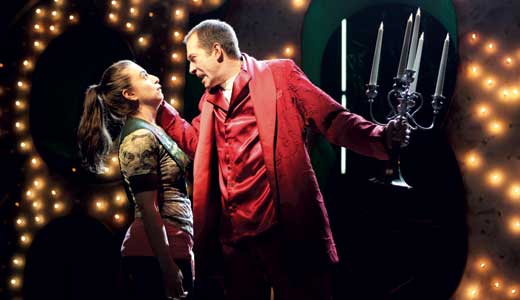 Just prior to this year’s Humana Festival of New American Plays at Actors Theatre of Louisville — the 35th installment of an event that has a seminal place in the history and future of regional theater in the United States — Amy Wegener, ATL’s literary manager, commented that “there’s never really a theme in the festival.” Perhaps not, but for better or worse, many of this year’s plays relied pretty heavily on a few narrative tropes: abandonment, abortion and the emotionally and socially painful aspects of intolerance for same-sex relationships.

This year’s festival — Marc Masterson’s final turn as ATL’s artistic director, ending an 11-season run that witnessed a resurgence in the company’s artistic standards and aspirations — was stronger than usual and included at least one brilliant work and a few others that certainly deserve to enter the national repertory.

The story of “BOB,” by Peter Sinn Nachtrieb, starts with the abandonment of a baby in the White Castle restroom at the corner of First and Market. But that abandonment — like so many of the abandonment myths that play a role in Western religion and mythology — is just the springboard for an epic journey of self-invention, a picaresque comedy that sprawls across the American cultural and geographical landscape, taking in rest stops and mansions along the way. Nachtrieb’s sketch-filled script hearkens back to Thurberesque satire, pointed but gentle, and unfailingly optimistic. It’s a juicy, fun-filled script, and director Sean Daniels and his crew of actors (Jeffrey Binder, Aysan Celik, Polly Lee, Danny Scheie, Lou Sumrall) squeezed it with lust and gusto.

The imaginative premise of Jordan Harrison’s “Maple and Vine” — a husband and wife trade in their modern life to join a community of 1950s re-enactors, exchanging sushi for pigs-in-a-blanket and Facebook for face-to-face connections — sounds like farce. But the playwright approaches her subject with a courageous logic that was well matched to director Anne Kauffman’s mature, emotionally subtle staging. In their quest for 1950s “authenticity,” this retro community finds itself inventing its own rules for intolerance, for anachronistic gender relationships, and, yes, for how to deal with a closeted same-sex relationship. Compelling performances by Kate Turnbull, Peter Kim, Paul Niebanck, Jeanine Serralles (in a remarkable portrayal of brittle vulnerability) and Jesse Pennington turned the play into a rich battle between competing values, and the outcome was controversial and provocative enough to feed many after-show arguments.

One last fully satisfying entertainment: “The End,” a set of nine comic-apocalyptic sketches by several authors (A. Rey Pamatmat, Marco Ramirez, Jennifer Haley, Allison Moore, Dan Dietz). This is the way the world should end, not with a bang or a whimper, but with a glad shout of uproarious laughter at the spectacle of the Four Horsemen of the Apocalypse facing unemployment, at the dilemma of four high school students whose prom night coincides with the end of the world, and now have to figure out how to go about the business of repopulating the earth — especially since one of them is gay.

Of the other plays, two exploit double tropes: Pamatmat’s “Edith Can Shoot Things and Hit Them” focuses on a young brother and sister who live on a desolate, isolated farm. Their mother is dead. Their father is a distant, unreliable presence who sends checks for their upkeep and occasionally phones in with paternal mandates. And the 16-year-old boy is exploring his sexuality with another boy from his high school. It’s a strong premise, but one that is poorly served by narrative and emotional redundancies and by performances that only deserve to be called “two-dimensional” to the extent that cartoons are two-dimensional; failing to find any life in the story, director May Adrales and the cast (Teresa Avia Lim, Jon Norman Schneider, Cory Michael Smith) settled instead for grating caricatures. Adam Rapp’s “The Edge of Our Bodies” is pretty much a one-actor show about a teenage girl whose father is distant and who is pregnant by a boy who has lost interest. Unfortunate staging forces actress Catherine Combs to spend a fair amount of time reading what’s basically a short story posing as a play — but when she gets to move, she is a force to be reckoned with.

With work, “Elemeno Pea,” by Molly Smith Metzler, directed by Davis McCallum, might become a pleasant enough comedy of manners and class. In its current form, it’s a mess of stereotypes in search of a plot, and when, in a desperate last-minute quest for emotional heft, the playwright inserts the subject of late-term abortion into the mix, the device feels manipulative, rushed and forced. This year’s group of three 10-minute plays — “Hygiene,” by Gregory Hischak; “Chicago-Sudan,” by Marc Bamuthi Joseph; and “Mr. Smitten,” by Laura Eason — were, by turns, inventive, thought-provoking and visually striking, and plain out-and-out fun.