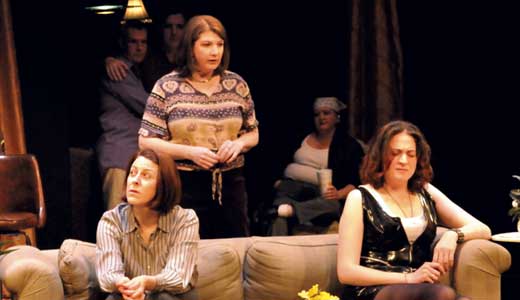 The Dinner
A comedy by Pandora Productions. Directed by Michael J. Drury. Continues through April 10 in the Kentucky Center for the Arts’ MeX Theater. For tickets or more info, call 584-7777 or visit www.pandoraprods.org.

In November 2008, slightly more than half of Californians voted to overturn a ruling by their supreme court that granted same-sex couples the right to marry in the Golden State. Supporters of “Prop 8,” as it came to be known, claimed in national press outlets like USA Today that marriage between opposite-sex couples was of “intrinsic value to our society.” Ironically, a special survey conducted by the U.S. Census Bureau in 2007 showed a 30-year high among opposite-sex couples choosing to forgo marriage vows in favor of cohabitation.

It was the passage of Prop 8 that spurred California actor Sandy Richard to pen her first play, “The Dinner,” which premiered just six months later in April 2009. Richard’s comedy offers up a buffet of issues facing the LGBT community. In addition to legal recognition of same-sex marriage, the play addresses the diversity within the community and the resulting lack of a common agenda or unified perspective.

Pandora producing artistic director Michael J. Drury helmed the project. He was initially attracted to the unpublished work because of its focus on a lesbian couple.

The action of “The Dinner” is set in the home of Todd (Ted Lesley) and Kevin (Sean Childress), a longtime couple dealing with the dissolution of the relationship between their friends Chris (Amy Holt) and Amy (Amy Lewis-Ziegler). Early on, we learn that Amy has moved on to a new relationship with the popular DJ Monica (Kristy Calman). Todd and Kevin decide it’s time to get Chris back on the horse — enter Lauren (Raven J. Railey). Throughout the play, the friendships are complicated by professional considerations: Chris is Kevin’s boss, and Todd is mentoring Lauren as she begins her real estate career.

Opening night performances were universally sound, albeit tentative in places. Leslie and Childress were believable as a longtime couple comfortable enough in their relationship to risk making it better. As Amy, Lewis-Ziegler careens onto the stage, a hilarious emotional train wreck headed for a sharp curve. Much of the play’s resolution rests on Lauren’s shoulders, and Railey makes a valiant attempt to give her character shape. Both Railey and Calman seem self-conscious at times, a problem that could be addressed by the services of a good editor, especially in Act II. That said, Richard’s script succeeds in its main intent, which is to show these six characters’ simple humanity. She presents them not as three homosexual couples, but merely as three couples without the stigma or bravado of “otherness.” This play is less about being homosexual than it is about being a 21st-century American.