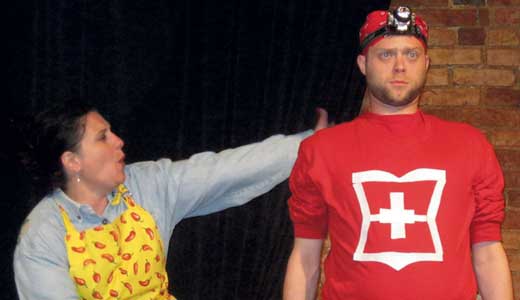 This festival’s name isn’t just cute alliteration — they’re not kidding. This night of the funniest and freakin’ weirdest 10-minute plays I’ve ever seen in one production, performed by 16 local actors, lived up to its name. I sat in a bad spot (my own fault), my back was twisted, and I was afraid the actors were going to drop blocks on me as they scampered past for impressively quick set-changes — but I didn’t really care. It was a fantastic experience.

The evening began with Brian Walker’s “Slut for Kush-Balls,” which took place at a Koosh ball convention and hilariously illustrated how people’s bizarre obsessions can bring them together. Leah Roberts was superb as a crazed Koosh enthusiast who dumps her emotional baggage onto her recently immigrated, very pregnant and lovable assistant, played by Natalie Fields.

Ben Unwin’s “Looney Tunes” and Carolyn Biggs’ “Home School” also featured some delightful nut-cases. In “Looney Tunes,” Joe Hatfield, who spoke in a haunting, rhythmic loop, is convinced his pet frog (fireball Michael Roberts) can sing — but only when no one else is around. “Home School” was one of my favorites — a clever, pun-a-minute piece about an “appliance whisperer,” acted expertly by Jennifer Starr Tennant.

In Mitch Fields’ “The Da-da, Da-da, Da-da, Da Song,” Bryce Woodard was perfect as a droopy but hopeful music teacher struggling to teach his three students (Kelly Krapp, Eric Welch and Shaun Kenney) a seemingly simple song. Kevin Gibson’s “Home Movies” started out light and familiar — we meet a typical family reminiscing on the couch, saying things one would only say around family members. After several gentle minutes of memories and inside jokes, the play took a sharp, heavy turn that transformed it into a poignant piece.

Less profound but similarly relatable were Carlos Manuel’s “Roommates” and Bryce Woodard’s “Water, Water, Everywhere …,” both of which explored the woes of dating — whether it’s a first date ruined by an overbearing, hyper-sensitive roomie or the “loser buffet line” encountered during speed dating.

On the more peculiar side were Nancy Gall-Clayton’s “The Librarian,” set in a future in which sex has been outlawed, and Sherry Deatrick’s “The Wettest Beak.” Deatrick’s piece is the third installment in a series featuring Brittany, a transvestite chicken and her dysfunctional (to say the least) family from London, Ky. I regret not having seen the first two, because while the fearlessly acted piece was full of sharp dialogue and perfect costumes, I was pretty much lost and felt like I didn’t get the joke.

Wrapping up the evening was Tad Chitwood’s “Double Helix,” an exploration of the human condition that was as funny as it was thought-provoking. Becky LeCron, Corey Long and Neill Robertson played a regular family of monkeys who eat bananas, read books, bicker and scrapbook. Robertson’s character performs an experiment where he successfully passes as human, but is unsuccessful at remaining scientifically detached. The play examined what science can and cannot explain, as well as our cultural obsession with identity.

There’s something for everyone in this diverse line-up of promising theatrical ditties, which served as a vivid reminder that we have some damn good playwrights, actors and directors ’round these parts.