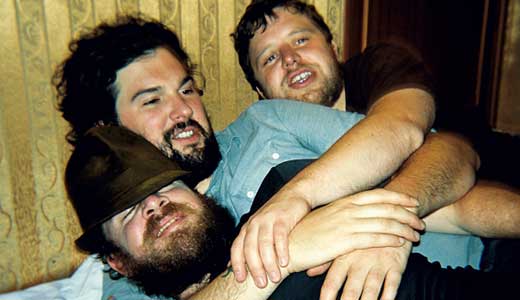 On No Witch, the third and latest album from Seattle’s The Cave Singers, vocalist/multi-instrumentalist Pete Quirk and guitarists/drummers Derek Fudesco and Marty Lund take their unique brand of smoky, drone-y Americana to newer, weirder, more exciting places, spicing up their stripped-down guitar-vocals-drums template with occasional keyboards, harmonies and even a churchy choir of female backing vocalists. But in a live setting, these guys still make it work as a trio, eschewing backing tracks and samplers in favor of crowd interaction and good ol’ boy gusto. LEO recently spoke with Quirk as the band trekked down the road to another gig on their headlining tour.

LEO: No Witch has been out for a month or so. How do you feel about it now that it’s been out there for a while?
Pete Quirk: We feel good about it. It feels like people are reacting well, and people are coming out to the shows. We’re excited it’s out there and that people can finally listen to it. It took us a while to make it.

LEO: When you guys play a show, does it make a difference if you’re the opener (like for Dr. Dog or Cold War Kids) or the headliner? Does it change the way you approach a performance?
PQ: Yeah, we play for a little shorter time when we open for bands that draw more people than we do. But it’s a good way for people who don’t know us to see us. The idea is to just gain more fans that way, you know? Cold War Kids and Dr. Dog have similar audiences in a way — they have kind of an interactive live performance, and so do we, hopefully. You can see a difference when we go play shows at places where we played with bands like Dr. Dog and Cold War Kids — people are there because they saw us with those bands. That’s how that works, basically. You’re on a tour with a big band, and hopefully it helps them out, too. It’s a real kind of back-scratching situation.

LEO: I saw you a while back in Knoxville, Tenn., and it was great. What struck me even as much as the music was your stage presence. What do you do to keep things entertaining on stage?
PQ: I think it’s easier if the crowd is into it and dancing and whatever they’re doing — yelling, heckling us. But yeah, we kind of have our routine, I guess, but it’s how we feel the most comfortable. There’s kind of a nervous energy, but we try to have fun with it rather than be too serious about it. We’re obviously serious about the music, but when we play a show, we really just try to enjoy ourselves.

LEO: Do you ever feel weird or naked on stage, especially trying to fill out some big stages as a three-piece?
PQ: I’m kind of used to it at this point, but it’s always nerve-wracking getting up in front of a bunch of people and singing. I feel like it’s the three of us up there rather than just myself, and we kind of just get wrapped up in the songs and the whole energy of the thing. I feel if we interact and talk with the audience, it becomes this whole “We’re all in this together” kind of scenario, and it makes it a lot easier. There’s not so much “We’re the band, and you’re the audience,” and there’s not this separation line here. If we can get rid of that, it makes it easier.