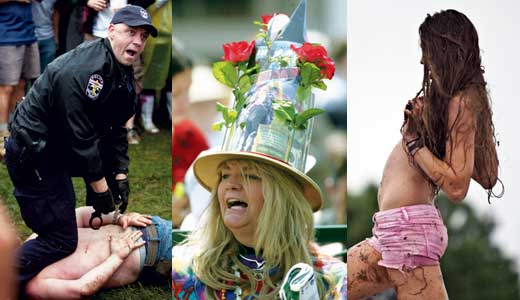 Arrested: Believe it or not, your chances of getting arrested at Churchill Downs on Derby Day are slim. Extreme drunkenness, nudity and public urination are typically ignored, meaning you have to be a total fucking moron (see “Porta-Potty Surfing” below) to end up in handcuffs. In 2010, police arrested only 66 degenerates out of a crowd of 155,804.

B-List Celebrities: The fact that acting tour de force Raven Simone’s anticipated attendance at Derby 2011 recently made headlines pretty much says it all. Past “hot” celebrity attendees include Nick Lachey, Joey Fatone and the contestants of “The Biggest Loser” (seasons 6 and 7).

Commemorative Glasses: For every $9 mint julep you ingest, you get a collectible glass that lists every Derby winner since 1875. Although seemingly unwise to equip thousands of drunken revelers with breakable drinkware, carting around a stack of glasses is a good way to keep your bourbon intake in check.

Decadent and Depraved: This is how Hunter S. Thompson described the Kentucky Derby in 1970; the same could be said today.

Equine: Of or belonging to the equine family, which includes horses and asses; Churchill Downs is overrun by both on Derby Day.

Foster, Stephen: (1826-1864) Known as the “father of American music,” Foster wrote “My Old Kentucky Home,” the official song of the commonwealth. Each year at Derby, proud Kentuckians butcher the lyrics to this little ditty, which referred to African-Americans as “darkies” until the general assembly replaced the derogatory term with the word “people” in 1986. Let’s hear it for progress!

God-Awful Hats: Some hats adorning the heads of highfalutin Derbygoers are tasteful and practical, but many are just plain god-awful. This includes, but is not limited to: hats so large they inhibit one’s vision or encroach on the personal space of others; consist of more tulle than the average wedding dress; or look like a pack of feral cats attacked a flock of birds.

Hooch: First definition: A concoction of booze (often of the high-octane variety) mixed with a beverage intended to mask the taste of alcohol, making for easy ingestion and accelerated drunkenness. Second definition: A sexually promiscuous woman who dresses the part. Both are prevalent in the Infield.

Infield: A large swath of soggy ground in the center of the track that is populated by about 80,000 people engaged in drinking, gambling and barfing. Only a small fraction of Infield attendees see an actual horse race on Derby Day.

Jockeys: These tiny humans ride animals in a circle for the enjoyment of normal-sized humans.

Kid Rock: Although he should be on the B-List due to the general shitiness of his music, this rapper-turned-country-music-star is one of the Derby’s few regular A-Listers. Just look for the guy in the wife-beater with stringy long hair and a patchy goatee.

Larry Birkhead: This Louisville native became famous by impregnating Anna Nicole Smith, whom he met at the annual Barnstable-Brown party (see “B-List Celebrities” entry above), where he was working as a lowly freelance photographer. A paternity test in his favor sealed his perennial seat on Millionaire’s Row.

Mint Julep: The official drink of the Kentucky Derby, traditionally consisting of bourbon, muddled mint, sugar and water over crushed ice. Churchill Downs serves more than 120,000 juleps over Derby weekend, and as a result, has resorted to using the Early Times Ready-to-Serve Mint Julep Mix; the pre-made swill pales in comparison to the real deal. But at least you get a free glass.

No Sleep: On Derby Eve — for one night only — Louisville bars are allowed to remain open all night long. Derbygoers who imbibed the night before typically rally the next morning with the help of coffee, Red Bull and more alcohol. By mid-afternoon, unconscious tipplers will be strewn about the Infield.

Odds: The ratio of the amount bet to the amount paid by the track to the winning ticket holder. This is how knowledgeable bettors make their choices. Novice gamblers like myself prefer to “choose the horsie with the cutest name.”

Porta-Potty Surfing: The sport of foolish drunks in the Infield, this entails climbing atop a row of portable toilets. Once on top of the johns, the brazen boozer is likely to dance, frolic, flash or even jump off with the hopes that the crowd gathered below will catch them. It’s usually cops waiting below.

Quagmire: Rain or shine, the grassy Infield of Churchill Downs will become a mushy mess. In the absence of precipitation, enough alcohol will be spilled by mid-afternoon to create a mud-pit, where inebriated, scantily clad Infielders will experience great joy wrestling.

Rich People: Unless you are slumming it in the Infield or standing around the Paddock, chances are you fall into this category. Be sure and take a moment to appreciate the irony that you are yelling and screaming about winning $2.60 on the favorite.

Sticky: If in the Infield, you will be sticky within one hour of arrival due to a mix of humidity, human sweat and spilled liquor. If you are in any other location at Churchill Downs, you will experience this phenomenon within two to three hours of arrival — it is inevitable.

Tarp-Stands: This term was added to the Derby lexicon in 2009 after a group of Infielders spilled a large amount of smuggled liquor on their tarp; determined not to waste even one drop, several of the group’s more industrious members disregarded warnings about germs and proceeded to retrieve the alcohol.

Underground Tunnel: A dark and dank concrete passageway that provides tens of thousands of Derbygoers with access to the Infield. It’s loud, cramped and likely to induce a panic attack if you are even remotely claustrophobic. Upon reaching the end of the tunnel, you will probably be “Sticky” (see above).

V-D: Although we don’t have statistics, it’s safe to assume you will contract one of these if you hook up with that frat dude from Alabama or the skank who showed her boobs at the third-turn.

Weather: It’s springtime in Kentucky, which means you could be sunburned and suffering heat stroke by the end of the day, or cold, wet and cranky. It’s rained on nearly half of the past 136 Derby Days. Last year, thunderstorms dumped well over an inch of rain. Your best bet: Plan on the anticipated May 21st apocalypse arriving early — pack your poncho.

X-Rated: Visit the third-turn of the Infield and you will see boobs. Guaranteed. The later the hour, the more boobs you will see. There might also be the occasional public sex act.

YouTube: If you are drunk and stupid enough to engage in the aforementioned “X-Rated” behavior, you might very well end up on the Internet. A search of “Derby Infield” on YouTube turns up hundreds of videos. You’ve been warned.

Ziploc Bags: Used to smuggle booze into Churchill Downs. They can be stuffed into bras and underwear or taped to your torso or upper thigh. Be sure and buy name brand to avoid leakage, and remember: yellow + blue = green.