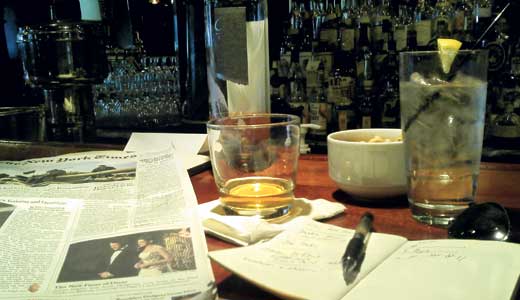 A scene from the Old Seelbach Bar during the writer's recent trip to Louisville.

If you attended the first of three David Copperfield magic shows at the Kentucky Center for the Arts sometime in 1996 or 1997, you’ve seen me. Plucked from the audience and summoned to the stage, I rode the levitating couch. I was selected for the act because I had a goatee and hair like Crystal Gayle, which conveyed a type of “local flavor” the producers found appealing. How do I know this? Because I was an audience plant. The show took a disconcerting turn, however, when I was recognized. As I made my way to the stage, I heard my name and then saw two former classmates from Atherton. Now, the magic doesn’t need to be real for the show to be legitimate, but it was uncomfortable, being noticed in the midst of my deception. Although I’m sure my friends couldn’t have cared less about the disingenuous nature of my magic couch ride, I kept hidden after the show.

I’ve thought about the magic show several times in the week and a half since my “36 Hours in Louisville” piece ran in The New York Times. Yes, my old friends, I was spying on you in February. No, I didn’t tell but a few people what I was doing. Yes, I did everything that I wrote. Much more, too. I was quite happy that the city was jazzed by the attention. Most of the feedback I’ve received has been positive, but what softly negative feedback I’ve gotten has fallen into two camps, both of which seem to view me as kind of a plant, a part of some show that isn’t quite right.

First, there are the people who have written to tell me I missed the best parts — I should’ve raved about Seidenfaden Café, or someone should’ve taken me to Old Louisville. Not everything wonderful about the city could make the cut. Old Louisville is beautiful, but I couldn’t make it work. I love Seidenfaden, but it wasn’t right. My perennial first stop during a trip home tends to be the bar at the Bristol on Bardstown Road, where I’ll sit for a spell with that local bartending treasure, Ken. Sadly, the Bristol didn’t fit into the neatly tied up 36 hours either. The list could go on an on — Proof, Mike Linnig’s, Edenside, the whole of Frankfort Avenue, et al.

The curatorial instinct doesn’t come naturally when you’re writing a love letter to your hometown, so believe me when I say selecting the content proved difficult. When assigned the piece — and for those of you who are interested in this kind of thing, I received the assignment after a pitch to the Travel Section; they didn’t seek out someone to write about Louisville — I realized I had tired eyes for the city. I adore the place, but my visits can be easily predicted. (To put this in perspective, for me a typical 36 hours in Louisville includes about eight hours at a bar and then somewhere between 12 and 28 hours of recovery.)

So I reached out to several unindicted co-conspirators and asked them to send me lists of attractions I might not have known about. New places. Places that weren’t bars or restaurants. I, in effect, asked them to select their favorite places and hot picks. I added those suggestions to my list of potential highlights and spent a week visiting galleries, restaurants, bars, museums, parks, etc. Over the week I was in town, more than 80 places received consideration. Fewer than 20 get mentioned in the final piece. It’s not that these vocal Times readers felt that my selections were off the mark — at least not totally off the mark — it’s just that they didn’t see their most iconic dive, restaurant or shop. And I suppose it is the case that I was playing a role distinct from that of a Louisvillian insofar as my selection was intended to seduce outsiders, not satisfy residents.

This leads to the second reaction, which is a bit more complex. These people responded enthusiastically — they took no issue with the content — but once they learned I was a native Louisvillian, not some exotic beast from a cosmopolitan elsewhere, their enthusiasm diminished. My insider status dimmed the luster of the endorsement. Believe me, this should not be the case. The fact that I was writing about where I was raised only meant that I avoided the obvious pitfalls like
Fourth Street Live.

What I learned more poignantly, though, and more so than at any time during the decade I’ve lived outside of Louisville, is that I am most decidedly in exile and that I no longer know Louisville. I’d heard the city was thriving — and on my visits home I saw evidence — but truthfully, when I thought of change in Louisville, I thought of sad stories. Hawley-Cooke becoming Borders. No more Barret Bar or Kaelins. The decline of ear X-tacy.

All travel writing thrives on estrangement and the tensions created by the sensibility of the writer and whatever expectations are met (or frustrated) by the location. I wanted to show Louisville in its new glory, but for me, Louisville is a haunted place, and I was afraid it had lost some of what made it great. I was wrong. A week as a silent tourist was revelatory. I discovered that what I feared was crippling nostalgia was really a more straightforward longing for home. I was won over anew by Louisville, quite unexpectedly.

This is a much harder endorsement to get. Not from someone who has never been to Louisville and is taken by its ample charm and subtle Southern rhythms, but from someone who’s left, who’s seen hints of change, and who’s returned to find that time has only enriched the city. I submit that an outsider, a true audience plant if you will, could never see our city with the appropriate wonderment as someone born and raised, departed and then returned.

Michael Washburn is a Louisville-born, Brooklyn-based writer. His piece “36 Hours in Louisville” appeared in The New York Times on March 31, 2011. You can contact him at www.michaelwashburn.org.