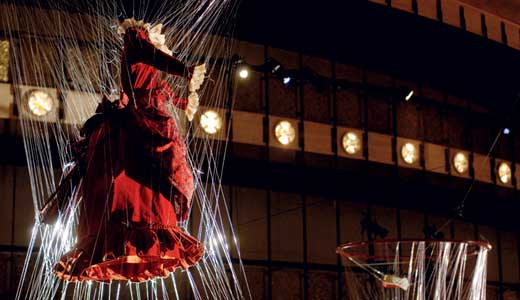 ‘How Orisanmi Chose His Head’

In the Yoruba culture of West Africa, which is known for its traditions of music and dance, there is a sacred poem that describes how newborns’ names are chosen and where their stories begin. Playwright, director and U of L theater professor Nefertiti Burton is particularly close to this poem; it inspired her play, “How Orisanmi Chose His Head,” premiering this week to wrap up U of L’s theater season. “This story is the source of my son’s name. When he was little, I shared it often with other children and families,” Burton says. “They had no idea that it was anything more than a delightful folktale, but the moral lessons and vivid imagery appeal to the imagination and spirit. After 30 years, I’m thrilled to bring a fully staged version to the public.” —Jane Mattingly

Running of the Rodents

“Peace, Love & Rats.” That’s the theme for Spalding University’s 39th Annual Running of the Rodents, the Derby lead-in tradition that, yes, pits rat against rat in a thrilling race for the big cheese. One might call it the most exciting two seconds in … well, rats. Trained by Spalding students, staff and faculty, the rodents compete for a garland of fruity cereal. The event was originally conceived by former faculty member Sister Julia Clare Fontaine. Local news personalities Barry Bernson and Dawne Gee will emcee the big event, while Churchill Downs bugler Steve Buttleman will announce each rat race with his signature call to the post. A public parade will precede the races, with plenty of 1960s-inspired tie-dye to behold; the running rodents will be named after various singers from the ’60s. My money’s on Paul McRatney. —Kevin Gibson

“Lord of Misrule” made a surprise charge out of the pack to win the National Book Award for fiction. It’s a tale of minor horse-racing tracks from a generation ago, with the horses doing their best but the humans often tripping up themselves or each other. Carmichael’s will host author Jaimy Gordon for a reading and signing Thursday evening. The big question for the night is, how many will turn out looking for yet another misty-hued tale of those who nobly aspire to make a name for themselves and their beautiful animals on the turf whereon is played The Sport of Kings? Wrong book, pal. This is highly stylized prose, with a main character whose sanity comes and goes. Everyone’s just trying to hold on at the 1970s West Virginia track ruled by provincial attitudes and second-rate thugs. It’s a book that challenges expectations — and that’s how this long shot came in to win. —T.E. Lyons

In an age when breast cancer awareness has become something of a lucrative fad (when KFC promotes buckets for breasts, you know something went wrong), it’s easy to mistake good intentions for corporate charlatanism. But underneath the glossy promotional materials and magnetic bumper stickers, a lethal disease persists. In this case, high-priced headwear is being auctioned off for a good cause. U of L’s Office of the President and the James Graham Brown Cancer Center invite you to enjoy an evening replete with a silent hat auction, cocktails by Brown-Forman and hors d’oeuvres by Ladyfingers to benefit breast cancer research, with 100 percent of the proceeds going to the American Cancer Society and Making Strides Against Breast Cancer. —Jonathan Meador

Now in its fourth year, Finnigan Production’s Festival of Funky Fresh Fun celebrates the best in local playwrights, actors and directors. The fest features 10 plays and incorporates 17 actors in 45 roles. This year’s line-up includes “Looney Tunes,” by Ben Unwin, about a man who hears a singing frog; “The Wettest Beak,” by Sherry R. Deatrick, about a transvestite chicken; “Slut for Kush-Balls,” by Finnigan founder Brian Walker, about Gypsies, collectors and assholes who desire the elusive Kush Ball; and “Home Movies,” by LEO freelancer Kevin Gibson, about a twist in quality family time. “This year’s line-up of plays is the largest and most diverse we’ve ever had,” says Walker. Audience members will be asked to vote for their favorite, and $200 will go to the play’s director and playwright. —Sara Havens

As an art form, Southern rock is still struggling to shake off its 1970s shaggy hippy doper image. Not that that’s a bad thing, or that it’s no longer true, but some of today’s finest modern rockers from deep in the heart of Dixie have introduced some upgrades to the formula. The Features, natives of small-town Tennessee, infuse brighter melodies and forgo the gun-waving machismo found in many of their predecessors. Where their pals in Kings of Leon have infused Southern rock with U2-style arena anthems, The Features have found more inspiration from pop and indie influences, while keeping a solid rock ‘n’ soul foundation. Louisville’s weird and wonderful Wax Fang share the bill at Zanzabar, where the PBR will most certainly be flowing. —Peter Berkowitz

Federalism and the Constitution

James Madison — Founding Father, fourth president and constitutional mastermind — said this about federalism: “The powers delegated to the federal government are few and defined. Those which are to remain in the state governments are numerous and indefinite.” Although this balance of power remains intact, its interpretation continues to spark debate after more than two centuries. A panel of experts will tackle this controversial topic during a symposium sponsored by the Alexander Hamilton Historical Society. A retired Kentucky Court of Appeals judge joins U of L and Bellarmine political science professors in an attempt to answer some pretty serious questions: Should the Constitution be read more strictly to limit national government? Is any controversial matter ever truly “settled” by the Supreme Court? How does the Constitution impact issues like health care, education, abortion? I told you this was serious stuff. —Sarah Kelley

Louisville gets a taste of Brooklyn when Talib Kweli visits Headliners on Monday. The emcee, who spent many a summer with family in Cincinnati growing up, is still best known for his classic outing with Mos Def as Black Star, though his ever-growing solo catalog has few misfires. Last year’s Gutter Rainbows, made with fans in mind, was an exclusively online album, a first for the muse-following rapper, and was a critical favorite. Before the show, he’ll visit ear X-tacy for an in-store signing and meet-and-greet from 6-7 p.m. One can hope his Reflection Eternal partner Hi-Tek could manage the hour-and-change trip down I-75 for an unannounced reunion to man the turntables. Regardless of who joins the man onstage, Kweli always puts on a good show and has a deep well of strong material to draw from. We’re in the middle of a decent run of good hip-hop concerts in town; buy some tickets and let’s keep ’em coming. —Damien McPherson

Tattoo artist and painter Dennis Pase finds skulls to be a fascinating object through which to explore his art. A transplant to Louisville by way of Florida, Pase tattoos six days a week but also spends at least 10 hours each week painting. After recently taking up oil painting (he previously concentrated on watercolors), his “Skulls” vision emerged. “I chose to paint skulls because, in my opinion, they’re a great way to learn shape and value, as well as depth,” Pase says. “And they’re the coolest things ever, so that helps.” “Skulls” can be seen hanging on the walls at Dragon King’s Daughter restaurant in the Highlands through the month of April. —Kevin Gibson

It’s the familiar ol’ streets of Louisville, just brighter, richer and more luscious — the result of Martin Rollins’ deft way with oil pastels. His work is well known in town, but this exhibition gives us more insight into the artist than we’ve had before. That’s because he has included original poetry that’s simpatico (his word) with the cityscapes.

“My current work is concerned with conveying a sense of place,” Rollins explains. “In this I am less concerned with rendering a specific site and its various details than I am in creatively responding to the thoughts and feelings the site evokes in me … I love poetry and knocking around words and phrasing to express myself. These short poems all arrived while I was in process with the artwork.” —Jo Anne Triplett

A little of Western Kentucky University’s talent is in Louisville by way of the exhibition “The Grid.” The nearly 200 artists had a job to do. They needed to “reference the grid in format, content, presentation and/or process,” according to Brent Dedas, WKU assistant professor of art. The resulting paintings, ceramics and sculpture are all “… a loose interpretation of the grid.”

Also showing is “Flowers: Allegro Con Brio (Joyfully with Spirit)” by Dru Pilmer. It seems she was a little tired of winter, so she started scanning flower catalogs. Pilmer gives her inspiration credit by listing the catalog pages in the titles of her expressionistic paintings. The reception for “Flowers” is Thursday from 6-10 p.m. —Jo Anne Triplett

While most sculptors use materials like clay, wire, wood or random odds and ends, E.V. Day’s medium is women’s clothing and old costumes. “I make sculptures that transform familiar icons of women’s empowerment and entrapment into new objects that confound conventional readings of these clichés, and constellate meaning in a range of emotions: anxiety, ecstasy, liberation and release,” Day says. The Kentucky Center main lobby has probably never seen so much fishing line as will be used to hang Day’s eight-piece installation of retired opera costumes, arranged in life-like positions and suspended from the ceiling. Originally commissioned for the Lincoln Center and presented by Louisville nonprofit artwithoutwalls, “Divas Ascending” recycles the elaborate attire of memorable characters like Carmen, Violetta and Don Giovanni and recreates these characters minus one thing — a body. —Jane Mattingly