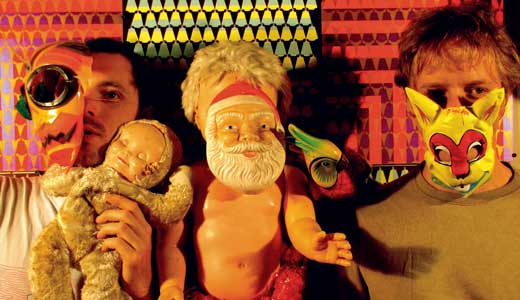 It’s spring, and mint is in the air. We can officially order mint juleps without eye-rolls from bartenders or strange looks from out-of-towners. Besides the manhattan, the mint julep is my favorite drink, which is why I’m honored to be a judge in the annual Four Roses’ Rose Julep Recipe Contest, held Thursday at O’Shea’s in the Highlands. Ten bartenders from the city’s finest restaurants and bars create a variation of the julep, and we have to figure out who’s got the best and most original concoction. “Mixology is huge in the spirits world right now,” says Four Roses master distiller Jim Rutledge. “The level of talent and creativity brought to the contest every year is unbelievable. It’s impressive how these bartenders can continually put such a fresh spin on Kentucky’s signature cocktail.” Ten juleps is not a bad way to spend an evening. —Sara Havens

Garrison Keillor’s radio variety show “A Prairie Home Companion” is part of my Sunday ritual. On more than one occasion, I’ve been spotted sitting in a parked car at my destination, listening intently as Keillor wraps up a tale about the fictional Minnesota town of Lake Wobegone, the lovable cowboys Dusty and Lefty, or, my favorite, Guy Noir, private eye. As part of the University of Louisville Author Forum, Keillor will interview renowned writer Billy Collins, who served as U.S. Poet Laureate from 2001-2003. Given the popularity and critical acclaim both men have garnered, tickets to the Bomhard Theater show sold out quickly, but do not fret: The Kentucky Center will air the live interview on a wide screen in its Kentucky Show! Theater. General admission tickets to the viewing are $10 and include a wine-and-cheese soiree and Carmichael’s book sale in the lobby beginning at 5 p.m. —Sarah Kelley

‘A Play Called The Spy and The Playwright’

It’s a play about writing a play — with spies. The young, talented and hilarious Corey Music and Nick Potter, who premiered “Hell’s Awesome” last spring, are back with some fresh material, presented by U of L’s student-run studio theater program. It’s a meta-theater piece about a pair of playwrights named Nick and Corey who write a play about a playwright who goes on a dangerous mission with a spy to help come up with inspiration for a new play. Make sense? Not only is this production free, it’s a three-for-one. That’s better than the Kia Store. The evening will include performances of “The Philadelphia” by David Ives, directed by Amos Dreisbach, and “The Sausage Eaters,” directed by Gary Brice. —Jane Mattingly

Whether you’re down with J.C. or not, you’re likely familiar with his big story, and the name Judas probably rings a bell — and not a good one. Stephen Adly Guirgis’ profound dark comedy picks up Judas’ story where it left off, but adds a modern flair — 2,000-odd years A.D., we find Judas still hanging out in hell, his trial ongoing. His lawyer is boldly asking the important but ignored question: If Jesus dying for everyone’s sins was the plan all along, how come the guy who enabled it gets punished for all eternity, just for doing his job? Mother Teresa, Sigmund Freud, Pontius Pilate, Caiaphas and even Satan himself are called to the stand to help decide Judas’ fate. —Jane Mattingly

“The Earth is the only world known so far to harbor life,” wrote noted astronomer, writer and cannabis advocate Carl Sagan. “There is nowhere else, at least in the near future, to which our species could migrate. Visit, yes. Settle, not yet. Like it or not, for the moment the Earth is where we make our stand.” In this spirit of “loving the one (planet) you’re with,” the fourth annual Mighty Kindness Earth Day Hootenanny will celebrate our very own pale blue dot — complete with music, a plethora of local vendors and environmental justice groups and, if the weather permits, the simple pleasure of sunshine. —Jonathan Meador

Lord have mercy: The Health & Happiness Family Gospel Band is back at it again, and this time it is hell-bent on bringing us closer to God with an Easter Eve Extravaganza Saturday at VFW Post 2921 on South Seventh Street. The ensemble features a number of Louisville musicians collaborating to make a joyful noise, with members hailing from bands such as Gladstone, Fire the Saddle, Yardsale, The Smacks!, and more. There will be rock ‘n’ roll, R&B, some country twang and plenty of old-time gospel music for you and yours. By the way, the band can’t guarantee that attending the show will necessarily gain you entry through the pearly gates one day … but it sure can’t hurt. —Kevin Gibson

Cahoots has seen its share of down, dirty and painfully real adventures throughout its many years and various identities. It hasn’t been known as an active concert venue for most of the recent past, but occasionally a bill will suddenly appear, as if squeezed out of the dampest used bathroom towels — and this might be the best one to date. Hide your kids, hide your wives — Lightning Bolt is not just a band, they’re a force of nature. The avant-punks from the artsy state of Rhode Island have been perfecting their act for almost as long as Wayne Newton — who’s harder to stomach is simply a matter of taste. Dress comfortably and be prepared to be a part of the show. It’s the type of music best seen live, in the moment, so take advantage of this surprising opportunity. Up-and-coming heavy hitters Straight A’s and Natives represent the locals. —Peter Berkowitz

Everyone loves polar bears; it doesn’t matter that they could bite your face off without much effort. We love to watch them swim and play — and the Louisville Zoo knows that. After six years of preparation, Tuesday sees the culmination of Glacier Run Bear Habitat, an imaginary town on the edge of the arctic wilderness where humans and wildlife have learned to co-exist. The exhibit offers incredible views and stories, plus opportunities for close-up — and safe — encounters with the bears. There’s also a seal and sea lion exhibit, and plenty more. —Kevin Gibson

U of L Chao Auditorium

Counterintuitive though it may sound, military service and community organizing aren’t mutually exclusive. Former Marine Capt. Rye Barcott discovered this firsthand while living in the slums of Kenya, where he founded a non-governmental organization dedicated to eradicating poverty, before becoming a Marine. He served in Iraq, Bosnia and the Horn of Africa. Barcott wrote of his incredible, seemingly contradictory experiences in a 2011 TED Book Club-selected memoir, “It Happened on the Way to War: A Marine’s Path to Peace,” about which he will lecture next Wednesday at the University of Louisville’s Chao Auditorium. He’ll also be reading from the book that same night at Carmichael’s (2720 Frankfort Ave.) at 7 p.m. —Jonathan Meador

This is WFPK’s 10th year of Waterfront Wednesdays, the series of free monthly concerts that takes place at Waterfront Park. (Note: This month’s concert is at the Big Four Lawn, near Tumbleweed, due to flooding.) If you’ve never been, you are missing out. If you’re a regular, then you already know this season starts next Wednesday with local rockers The Deloreans, singer-songwriter Sarah Jaffe and Ohio popsters Walk the Moon.

Jaffe’s debut full-length, Suburban Nature, was given to me by a co-worker a few months ago, and it hasn’t left my car’s CD player since. The Texas native has been selling out mid-sized venues all over the country, so this is a great chance to catch a glimpse of a rising star. Grab a blanket, buy a beer, sit back and relax. Jaffe’s music will inspire. —Sara Havens

Ray Kleinhelter’s “The Figure and the Landscape” is a slight departure for the artist. Well known for his cityscapes, it seems Kleinhelter has revealed a hidden passion for the human figure. But after a bit of study, viewers will still recognize the artist’s fingerprints on the new paintings. The familiar use of color, brushstrokes and shadow are all there, but are now shaded with emotion.

“Horses and Birds” is Morgan Fisher’s introduction to Louisville. “In our almost 20 years, we have only worked with three equine artists (and we have been approached by hundreds),” says gallery owner Billy Hertz. Hertz says the gallery was attracted to Fisher’s work because of how her strong sense of composition intersected with color-field painting. “That distinguished her work from (what) you would expect to see around horse country.” —Jo Anne Triplett

‘Trompe l’Oeil, What Seems to Be’

The Gallery on Pearl?

Regular readers know I’m a sucker for trompe l’oeil. Fooling me into thinking something made out of wood, paint or, in this case, clay is not what it seems never ceases to delight. It’s time to hail a new master. Susan Sidebottom’s detailed ceramic works reveal the extraordinary skill that’s needed to achieve full-on trompe l’oeil status. “I have been bugging Suzanne for over two years to have a one-person show at our gallery,” says John Guenther. “Her pieces are wonderful. They are quite creative and very imaginative, unique to the world of ceramic art and personal. I don’t know anyone within the Metro area or, for that matter, region that is creating this sort of ceramic artwork to the high degree she is.” —Jo Anne Triplett