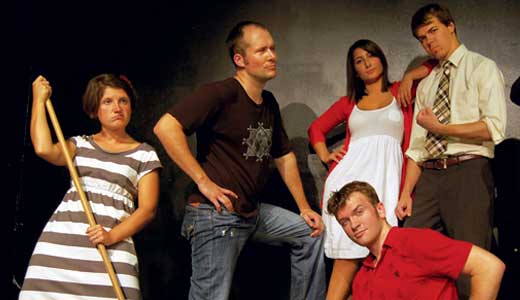 Nine U of L graduate students are out to make you laugh, cry and experience every emotion in between at tonight’s “Solo Command Performances.” The plays, penned by the theater students, cover a wide range of genres, including comedy, tragedy and folk tales. With names like “Mormon in 15 Minutes or Less,” “Cleaning up the B(lack) S(tereotypes)” and “Three Girls and a Guy,” the evening should be interesting, to say the least. “The students come from nine different states, and their creative work is just as varied,” says theater professor James Tompkins. “They have sharpened their skills with major roles in our theater productions over the last three years, and these plays give them a chance to showcase their creative talents in writing as well as acting.” Some of the plays may contain offensive material, so check your closed-mindedness at the door. —Sara Havens

Don’t write a song yet, but this year, The Bard’s Town is getting into the Derby spirit with their “12 Days of Derby Celebration.” Each night leading up to Derby, the live music and comedy venue will host a band, comedian or improv troupe, concluding Derby evening with Chicago’s Henhouse Prowlers. This Friday will feature Project Improv, the local comedy group that is always unpredictable, side-splittingly funny and never boring. But if you can’t make it out Friday, don’t worry, there’s 11 other nights of entertainment. Whether it’s “The Drunk and Sailor Pirate Show” (April 30), “The Great Cream Boat Race” (May 4) or “The Stable Brown Party” (May 6), The Bard’s Town promises fun this Derby season. —Brent Owen

The Kentucky Derby Museum this week opens a major new exhibition honoring jockey Bill Shoemaker. “The Shoe” retired in 1992 as the leading race winner of all time, with 8,833 victories. Over four decades on the turf, Shoemaker helped define the “Run for the Roses,” becoming the most famous rider in the world’s most famous race. He rode in a record 26 Kentucky Derbies and won the race four times — with Swaps, Tomy Lee, Lucky Debonair and Ferdinand. Shoemaker, who died in 2003, bequeathed his entire collection of memorabilia to the Kentucky Derby Museum. It’s a treasure trove of personal mementos and memories — including 14 large scrapbooks that tell the great jockey’s story and recreate his era. The pages of the scrapbooks will be turned periodically so that fans may look back through The Shoe’s career. —Bill Doolittle

Doyle Lawson is a legend, one of the last-standing giants of his generation. Is this a great chance, a blessed opportunity, to see a living piece of history in a great setting, at a reasonable price? You bet your bippy it is! The man just celebrated his 66th birthday last week, and both he and his band remain in peak form. In fact, Paul Simon — an authority on recognizing (and usurping) authentic folk music — is a fan and recently recruited the group to play with him on his new album. The born-again Lawson infuses Quicksilver’s bluegrass with praise, and sweet, sweet harmonies that will carry you from Friday night all the way through Sunday morning. For young hepcats who have heard that Bill Monroe was, like, awesome and stuff, here’s your chance to see a man fit to carry on his tradition. In a barn. —Peter Berkowitz

The Fervor are a tight machine fueled by the dueling spirits of rock and pop, past and future. They are inspired and indebted to the finest pop rockin’ outfits of the ’60s and ’70s, ’90s and today (fully cognizant of the fact that little of value happened in the ’80s), but are not held back by yesterdaze. Singer/keyboardist Natalie Felker’s vocals can be sweet or tough, sometimes both at once. Her guitarist husband, Ben Felker, is a riff machine hurling rock at you, but it rarely leaves a black eye — he’s gentle and loving with his awesome power. Louisville-based international rock star Jim James of My Morning Jacket wrote this about their new album, Arise, Great Warrior: “When I first heard the liquid strands of The Fervor’s arise great warrior flow thru my ears … it all feels so natural and peaceful … a necessary part of life, new born and floating freely in the cosmos forever now.” —Peter Berkowitz

Aside from allergies, unpredictable weather and the Derby, nothing says spring in Louisville like the Cherokee Triangle Art Fair. Now in its 40th year, the event will feature the wares of more than 200 artists, ranging from pottery and blown-glass to paintings and handmade jewelry. While browsing the booths along Cherokee Parkway, fairgoers can enjoy food — including tasty grilled fare — and drink — including ice-cold beer, which will be served until 8 p.m. on Saturday. There will be an art tent for children, as well as live music throughout the weekend: On Saturday, No Tools Loaned (bluegrass) and Cosa Seria (salsa) play, and on Sunday, King Sonic (rockabilly) and The Jaywalkers (blues/rock) take the stage. The art fair is a pet-free zone, so leave Fido home; just be sure and buy him an artsy gift to make up for it. —Sarah Kelley

Some relationships are like a knee-weakening addiction. It’s that sort of inter-personal addiction that has held Kevin Fletcher, Chris Armstrong and Sean Smith, the core of Uh-Huh Baby Yeah!, together since 2004. They’ve broken up, gotten back together, changed names, and experimented with genres time and again; but three years ago, with the addition of guitarists John Braboy and Johnny Blaze, things began to come into focus. Now, after releasing their debut EP, Sex Panther!, last year, Uh-Huh Baby Yeah! is ready for the world to hear their first full-length album, Til Death Do Us Party, coming out on Little Heart Records in May. They will perform at the album’s release party this Saturday. —Brent Owen

When I was 11, my friend Clark and I put my 45-rpm copy of “We Are the Champions” on repeat on his mom’s turntable. And we listened to it, like, 178 times in a row. When the Louisville Orchestra presents The Music of Queen Saturday at the Louisville Palace, chances are you’ll get a broader mix from the catalog of the group that brought us “Bohemian Rhapsody” and other classics. The Music of Queen premiered in 2009 and quickly garnered a following, along with critical acclaim. Singer Brody Dolyniuk handles the tough job of recreating Freddy Mercury’s vocals, while the orchestra will provide all the musical dynamics. If you go, expect to hear songs from Classic Queen, A Night at the Opera, Sheer Heart Attack and more. Listen closely, though, because they will only be played once. —Kevin Gibson

The final curtain falls on the venerable Louisville Bach Society with a performance of Johann Sebastian Bach’s Mass in B Minor on Sunday at Harvey Browne Presbyterian Church. The Bach Society was founded in 1964 by Melvin Dickinson and his wife, Margaret, who are retiring this year. The Mass in B Minor — written by Bach in 1748 and possibly never performed in his lifetime — is considered one of the foundation works of all classical music. In his program notes for the concert, Dr. John Hale says, “To hear the ‘B Minor Mass’ is to enter a cathedral of sound, unimaginably vast, yet completely wrought.” The Bach Society first presented the work in 1966, and it has been reprised several times since. Society members felt no other work would more fittingly honor the Dickinsons. Mr. Dickinson conducts. —Bill Doolittle

‘Water, Wind and the Sun’

I walked into the gallery and was both calmed and intrigued by Rick Bennett’s ocean and island paintings. Water lapping against the shore, even in a two-dimensional world, can have that effect. After jolting myself out of a stupor, I then realized how drawn I was to the abstraction of water. Welcome to paradise. “I’ve been working on the ‘Islands’ series for about 10 years following some trips to the Caribbean and Hawaii, where I was struck by the iridescent water,” says Bennett. “To me, each painting is like a big musical cadence … I look for a balance between simplicity and complexity, motion and stillness, and abstraction and illusion. Working on this series has led to all kinds of experiments and continues to be a very pleasant obsession.” —Jo Anne Triplett

The big draw at the Mellwood Arts & Entertainment Center is the work of Carlos Gamez de Francisco, the talented young Cuban artist now living in Louisville. His images “seem to escape the laws of reason, physics and biology,” he says. The paintings will be up through May 21 in Gallery M.

The Pigment Gallery has “Scrapboarding: Beyond the Book” by Carol Labashosky, which asks whether scrapbooking can be a fine art. “It’s craft in the hand of a crafter,” she exclaims. “It’s art in the hand of an artist.” New artist Aishwarya Bavle is showing in the Bridge Gallery. She walked in asking for advice and ended up with her first exhibition.

Both Labashosky and Bavle will have closing receptions during the April 29 FAT Friday Trolley Hop from 6-9 p.m. —Jo Anne Triplett

Two new exhibits are now on display at the Revelry Boutique-Gallery on Barret Avenue. In the REV Gallery is “Pop! Goes the Easel” by Erik Orr, a series of paintings featuring comic book art of the 1940s, ’50s and ’60s reinterpreted on plywood cutouts. Bonus: Come in dressed as your favorite comic book character to redeem a special prize. The main gallery will feature “Flower Power,” works in clay by Columbus, Ohio, artist Sylvana. Her intriguing collection explores the mystic and spiritual nature of the flower. —Kevin Gibson