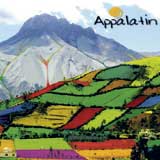 Oh, that name. It’s around the third track that you notice it. It’s not the most creative name, but once you start hearing serious Latin rhythms underneath a style of music that’s never had Latin rhythms underneath it before, you’ll let them get away with just about anything. It’s genre-fucking at its most blatant, but that’s OK. If it’s rootsy authenticity you’re looking for, look elsewhere. This self-titled album is thoroughly enjoyable, and when it veers toward the Latin side, as it often does, it shows off impressive instrumental and songwriting chops along with a restrained power. When the fusion is complete and true, as on “Shady Grove,” a much-loved 18th-century folk tune, the results are fascinating. The song, like much of the record, is like a soundtrack to a story or a place that may or may not exist.