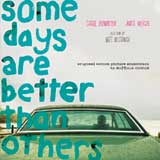 Eluvium mastermind Matthew Cooper dials his signature sound way down on this film score, which is saying something, since Cooper wasn’t exactly known for heavy dynamics to begin with. Here, he downshifts his compositional M.O. from “subtle” to “barely perceptible,” crafting an effective soundtrack that demands attentive listening — even on songs that aren’t “songs” so much as soupy washes of sound that evoke a sustained mood. It’s easy to argue that the impact of Cooper’s score, like so much incidental music, is inherently limited sans visuals. But Cooper’s premise of creating the score using damaged and discarded instruments is an inspired one, and his use of simple melodic themes gives the record a whiff of accessibility it might have otherwise lacked. Nothing much distinguishes any one song from the next, but Some Days makes for placid, evocative background music.