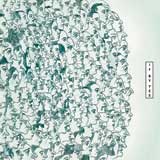 If By Yes is led by Petra Haden (That Dog) and Yuka Honda (Cibo Matto), with guitars and drums by Cornelius, aka Keigo Oyamada, who mixes a few tracks. The band sends their warped vision of stateside dream-pop through Japan, then filters it back through Honda’s Japanese-American experience. Haden’s vocals are chopped and layered until they can no longer support their own weight, and, indeed, many songs float away, never having known the pleasures of solid earth at all. The whole album seems a very Japanese album, in that it showcases the knack that some Japanese musicians have for ingesting Western musical ideas and then recasting them as something warped, tracing a tangent from the mainstream invisible to most American musicians. Sometimes a solid beat breaks up the ethereal, bubbling vibe, but on the epic closer, a pounding drum and Haden’s wordless, Ono-esque wail sends you off into the cosmos.