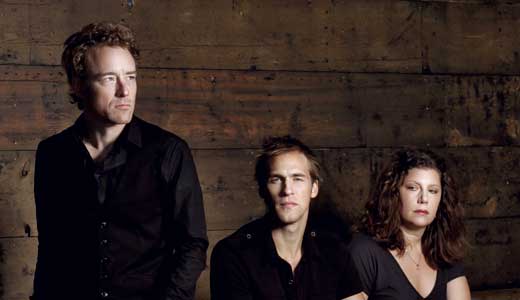 The Minnesota-based trio Low, coming to Headliners on Friday, is enjoying some of their best reviews ever with their newest album. The simplicity of the disc’s title, C’mon, is in keeping with a band that is vaunted for its less-is-more approach. Husband and wife Alan Sparhawk (guitar) and Mimi Parker (percussion) generate a rich listening experience with very few chords, a tempo that leaves room to spare, and just one or two repeated lyric phrases.

Of course, it helps to have some guest guitar work from Wilco’s Nels Cline, and to record in an old church hall that yields a sumptuous sound. But C’mon is also rife with great examples of the mesmerizing songcraft that has been the hallmark of this veteran “slowcore” band, such as the hypnotically rhythmic hooks sung by Parker on “You See Everything” and “Especially Me.” Sparhawk takes lead for a banjo-haunted tale of baseball bat wielders, Al Green devotees, and “Witches.”

LEO spoke to Sparhawk recently by phone. When asked to give advice to novice musicians, he was thoroughly candid and direct — and a fan of a traditional work ethic: “I’m a fairly scattered, ADD, never-finish-anything kind of guy. And I think just being able to get a little bit of that thread every day — playing guitar, every day engaging whatever it is that you’re thinking about musically — that’s where it is. It’s not about knowing all kinds of songs. It’s that time of you making music. You’ll eventually come up with something pretty honest.”

LEO: Your trio has had almost as many different third members as Spinal Tap had drummers. Is it uniquely difficult to be the third member of a band when the other two are married?
Alan Sparhawk: I imagine it is difficult, and that’s probably a factor. But I can safely say about pretty much everybody who’s been in the band and left — it’s generally been reasons other than Mim and I. The intensity of working in a creative situation and being stuck in a van with people for weeks on end — it’s hard on anybody.

LEO: Has your appreciation for the road changed from your earliest days of touring?
AS: As much as some stuff gets to be, (in a tired sigh) “Oh, boy, I’ve been here a million times,” there are things that do get easier. I think I’m a lot less anxious now, just because I know where we’re going. We (had) never been out of the state before, so it was scary and weird being there with a map at a pay phone over in the gas station, wondering where we’re supposed to go.

LEO: Back then, were you a perfectionist for club sounds?
AS: At that level, you really don’t have much control. And we kind of knew that going in. We’re playing this music that’s … meticulous. And it’d be sort of sensitive to the situation coming from the audience. We knew that it was gonna be weird and awkward every night — and then just kinda went from there, trying to make the best of it. There were times when we’d get totally ignored or people would call us “a bunch of junkies” and they’d throw cups and stuff. But, I dunno … to me, that was in many ways just as validating as playing to a full house.