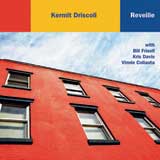 Kermit Driscoll, first-call bassist on the jazz scene for a quarter century, has just released his first solo project, Reveille. He is joined by former employer and longtime friend, guitarist Bill Frisell, drummer extraordinaire Vinnie Colaiuta and up-and-coming pianist Kris Davis. Driscoll embraces the seemingly contradictory concepts of funk and freedom, structure and chaos. Even the two “covers,” Zawinul’s “Great Expectations” and the traditional “Chicken Reel,” are reimagined, the former as power-fusion, the latter as a strut that edges toward virtually abstract sound. “Ire” opens with eerie prepared-piano and guitar, then morphs into an exploration of rhythm. “Martin Sklar” and the closing title track are both highly melodic and feature the gentle jazz twang of Frisell’s signature playing. Reveille succeeds in showcasing Driscoll’s virtuosity and “big ears,” which have led him to work with artists ranging from the New York Philharmonic to John Zorn to the Pointer Sisters.