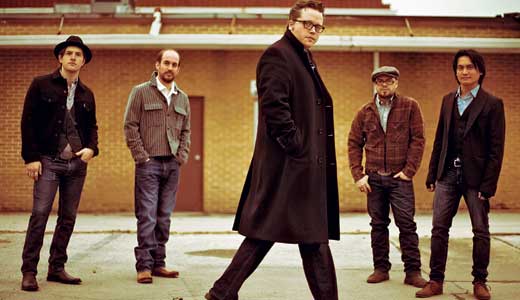 It’s a good thing Jason Isbell has found he can make a living as a musician. Before recording his new CD, Here We Rest, he got a taste of how he’d fare if he didn’t have a tour or an album to keep him busy.

“I would make a terrible retiree,” Isbell says. “I just have to have something that I’m doing that I feel betters me or the people around me, or I don’t feel like I’m earning my keep.”

Isbell hasn’t really had an opportunity to test out a life of leisure any time during the past decade, as he was a member of Drive-By Truckers from 2001 through 2007 and then, as a solo artist, strung together three more years of touring around trips to the studio to record his 2007 solo debut, Sirens of the Ditch, and his 2008 album, Jason Isbell and the 400 Unit.

Finally in 2010, Isbell got off of the road and decided to spend some time in his hometown of Sheffield, Ala. (part of the Tri-Cities area that includes Florence and Muscle Shoals).

It didn’t take long for Isbell to feel the itch to get busy working toward Here We Rest, but he found his stretch of rest and relaxation wasn’t at all idle, wasted time.

As he settled back to life in northwest Alabama and talked with family, friends and even patrons at his favorite local watering hole, D.P.’s, Isbell found that the region had been hit hard by the recession and lots of folks had stories worth hearing.

“I really feel like it’s just a high level of frustration and aggression that I haven’t seen in this area in a long time,” Isbell says. “People feel like they’re out of control. They feel like they don’t have any control over their own lives right now, I think. It’s frustrating. It causes people to do things like fight and get all drunk and steal, and it causes general disarray.”

Many songs on Here We Rest reflect the stories Isbell heard and the general mood of the region. “Save It for Sunday” finds a bar patron unwilling to hear the troubles of another person because we got cares of our own. “Tour of Duty” is a tale of a returning soldier whose relationship and prospects for a productive life have been damaged by war. “Alabama Pines” follows a similar theme, but in this case, it’s an everyday Joe who has become disconnected from his life and his lover and isn’t sure how to find his way back on his own.

The music Isbell wrote to accompany his lyrics brought out new dimensions in his sound. There are still tastes of the brisk rock heard on the first two CDs (“Go It Alone”) as well as the soulful pop sound that grew more pronounced on the second (“Stopping By”).

But the new album brings out more of a country side to Isbell’s music, particularly in songs like “Alabama Pines,” “Tour of Duty” and “Codeine.” Isbell also delivers a festive taste of New Orleans on “Never Could Believe.”

Fans should expect to hear a good cross-section of songs from Here We Rest when Isbell and the 400 Unit stops at Headliners on Friday. But that’s not all the group has up its sleeve.

“We don’t ever make a set list before we play,” he says. “The last few shows we’ve done … we played the majority of the new album and then some stuff from the last couple of solo records and a couple of the Truckers songs. We play a pretty long set, so if we play a full set, we’ll have time to do stuff from pretty much every different project.”