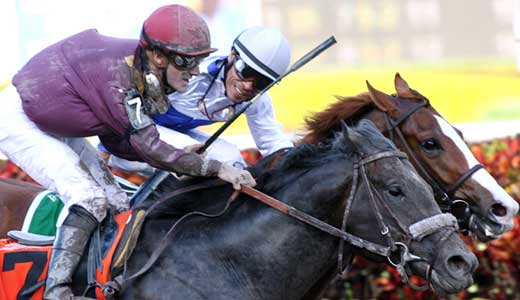 Ever since Uncle Mo cruised to a fast and seemingly effortless victory in the $2 million Breeders’ Cup Juvenile last fall at Churchill Downs, serious, over-the-winter Derby Talk has been limited to that horse and … well, there really hasn’t been an “and” horse to fill up a sentence with Uncle Mo.

Sunday in Miami, a charcoal-brown colt named Dialed In won the Florida Derby, announcing himself as a second stellar prospect for the upcoming Kentucky Derby.

No doubt other 3-year-old prospects will toss their names into the Derby bowler hat the next two weekends, as the final four important Derby preps are scheduled. That includes Saturday’s Wood Memorial in New York, where Uncle Mo will step into the starting gate for his final pre-Derby race.

But for now — for a couple days, at least — there is a sharp new horse on the block in Dialed In, who came from way, way back to nail 60-1 shot Shackleford in the final strides of the 1 1/8-mile Florida Derby. Along the way, Dialed In cruised past several highly touted 3-year-olds, then “dialed in” on streaking Shackleford, who ran a big race for Louisville-based trainer Dale Romans. The victory established Dialed In as not only the best of that bunch, but a horse who might challenge mighty Uncle Mo — especially at the 1 1/4-mile distance of the Kentucky Derby.

Dialed In is owned by Robert V. LaPenta — who finished second in the Kentucky Derby last year with Ice Box — and is ridden by Churchill Downs’ riding champ Julien Leparoux. But the name you’re going to hear over and over again in the coming five weeks is that of his trainer, two-time Kentucky Derby winner Nick Zito.

Bred in New York City, but “born again” every spring in the Bluegrass, Zito is established as one of a handful of horsemen whose name is automatically associated with the Kentucky Derby. He won with Strike the Gold in 1991 and Go For Gin in 1994.

But what is most endearing about Zito is his passion for his horses, and the special traditions that unfold under the Twin Spires. And it is obvious Dialed In has the gravel-voiced trainer stirred up.

Could be. Dialed In’s victory move was certainly spectacular. The son of Mineshaft and Miss Doolittle (that’s the mare’s name, I swear) merely loped along last for the first five furlongs of the race — several horse lengths behind the next-to-last place horse. As he caught the field by the far turn, Leparoux simply steered Dialed In to the outside to pass — then finally asked his mount to dig in as the field turned for home. Dialed In lurched inward as he switched leads, then lowered his head and accelerated to catch Shackleford. A powerful performance.

Meanwhile, at a quiet training center a few miles north of Gulfstream Park, Uncle Mo missed all the Florida Derby excitement. (No cable TV in his stall, we understand.) But this week, he’ll board a van to New York for the Wood Memorial, trainer Todd Pletcher’s choice for Uncle Mo’s final Derby prep. Everyone expects another breathtaking performance.

Uncle Mo is undefeated, and probably has no idea there could be challengers on the horizon — and may not care. Unlike Dialed In coming from behind, Uncle Mo steps right out of the gate running. In the lead, or right with it. Goes to the front, as they say, and improves his position. Uncle Mo won the Breeders’ Cup Juvenile by nearly four lengths, going away. And his other victories have been by four, four and 14 lengths.

Of course, there are nearly always fast horses like that at this stage of the year, coming to the Derby — front-end horses that seemingly outclass and outrun mere mortal opponents. When they run off again in the Derby, they call those kinds of horses Seattle Slew. When they don’t, they call them Beaten Favorite. And other names not so polite.

The best thing about Uncle Mo may be his owner, 41-year-old Mike Repole, a lifelong racing fan who grew up reading Russ Harris’ racing column in the New York Daily News and riding the bus across Queens to Aqueduct Race Track. Repole got rich inventing and developing the drink brand Vitaminwater, which he sold to Coca-Cola for $4.1 billion. He then poured a bunch of his cash into horses and has done well. Repole told Daily Racing Form writer Jay Privman that a racehorse owner better like roller coasters, because besides the highs and lows, “there are a lot of loops.”

Luckily, his point of view remains more from the grandstand than the turf club.

“I know this could last two more years or two more hours,” Repole says of riding the comet with Uncle Mo. “When I dreamed years ago of having a horse that people would talk about, I thought about the exciting part. I didn’t think about the pressure … It’s one thing to be just the Derby favorite. But the hype, people talking about the Triple Crown, Seattle Slew, Affirmed, Secretariat — that’s something.”

The fastest ‘Factor’ in Hot Springs

Elsewhere, Premier Pegasus will be a lukewarm favorite for the Santa Anita Derby. Jaycito is a come-from-behinder who often settles for second or third — like his grandsire Cryptoclearance. A promising newcomer is Mr. Commons, trained by John Shirreffs, of Zenyatta fame. Shirreffs also handled 2005 Derby winner Giacomo.

The following weekend, the Blue Grass Stakes will be run at Keeneland, with no apparent favorite. But the Arkansas Derby, at Oaklawn Park in Hot Springs, could include another blow-by from a fast colt called The Factor, trained by Bob Baffert. The Factor is lightly tested, but sizzles on the front end. “One thing is for sure: They don’t want to run with him early,” Baffert says, “or they’ll pay for it.”

A late possibility for the Kentucky Derby is smartly bred Master of Hounds, who recently hopped a plane from his “yard” in Ireland to Arabia to finish a fast-closing second in the 1 3/16-mile U.A.E. Derby. He could hop another plane to Kentucky and would be well intended.

Several prep race winners carry interesting names: Animal Kingdom won the Vinery Spiral. Watch Me Go won the Tampa Bay Derby. And Pants On Fire won the Louisiana Derby. Any of those would read well on a Derby julep glass.

Racing in Kentucky makes a spring forward Friday with opening day at Keeneland. The beautiful Lexington track runs four weeks in April, with racing Wednesdays through Sundays, except Easter, April 24. The track is celebrating its 75th anniversary this season and has never been more popular. Almost every Saturday, it seems, Keeneland breaks another attendance record. The racing has gotten stronger every year, with loads of good horses, full fields, big pari-mutuel payoffs — and excellent amenities for fans.

Friday also is College Scholarship Day. Admission is free for college students, who may register for $1,000 scholarships sponsored by Keeneland and the Kentucky Thoroughbred Association. Ten scholarships will be given away that afternoon. For those seeking an advanced degree from the Handicapping School of Hard Knocks, scholarships must be earned at the windows.