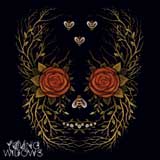 Louisville’s Young Widows summon a pummeling — if not particularly tuneful — menace on their third full-length. Most of the album’s nine tracks follow a similar sonic blueprint — grimy guitars smeared across lumbering rhythms, vocals intoned through what sounds like clenched teeth. In other words, the band aims for a specific mood — in this case, creeping dread — and sustains it splendidly, even if the consistency comes at the expense of any real melodies. The same lack of hooks, coupled with a monochromatic sonic palette, gives Lightness’ tracks a same-y quality that’s seemingly by design; it’s an album clearly designed to be greater than the sum of its parts. Lightness is filled with songs whose structures often remain inscrutable even after several listens, but their cumulative effect is a tense, evocative atmosphere that echoes long after its climactic final stretch peters out.