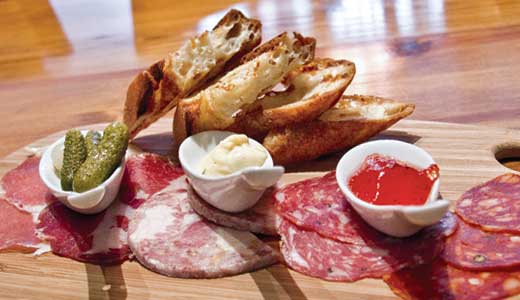 It has bs well over a decade now since baker Bob Hancock and his wife, Kit Garrett, came back home to Louisville from the Pacific Northwest with a bucket of natural bread starter bubbling in the back of their van. They installed a 45,000-pound, $50,000 Llopis (“YO-pee”) oven from Barcelona in the back of a red brick Frankfort Avenue storefront and proceeded to raise the bar for artisanal European-style crusty breads to new levels.

Now their Blue Dog Bakery is a local culinary landmark. Blue Dog breads appear on the tables at many of the city’s top restaurants, but Hancock, while still overseeing all this bready goodness, is turning his creative spirit to another delicious food: pig meat.

He has been raising heirloom swine on a farm near Louisville while learning the art of making ham, bacon and charcuterie. Though Blue Dog has usually been open only for breakfast and lunch, last winter the café started opening for dinner three nights a week as Red Hog Tapas. After a short break, Red Hog is back.

Almost the entire, enticing menu of creative, nicely crafted small plates features some version of pig flesh, much of it the result of Hancock’s own agricultural pursuits.

Red Hog has been slammed every night it’s been open: Thursday from 7-10 p.m., Friday and Saturday from 7-11 p.m. Expect a wait, which you can spend standing around a high-top in the front room, sipping a glass of interesting wine or artisanal beer from the short but well-chosen lists. If you don’t mind early dining, we’ve had good luck getting an immediate table when we show up right at 7 p.m. or a little before.

Service is generally smiling, friendly and conversational, and the food … well, let’s just say Hancock’s meats, Blue Dog’s breads, and the Blue Dog/Red Hog kitchen’s skills come together in a combination that rarely miss the mark.

Counting specials, you can usually choose from about 30 selections. Most assemble a table full of small plates for noshing and sharing. Individual item pricing is reasonable, from $4 for a variety of bruschetta; $6.50 to $8 for sandwiches (“panini and bocadillos”); $6 to $13 for “other stuff” that doesn’t quite fit into the previous categories; and $12 for pizzas, fired until crisp in that massive Llopis oven.

We tried a lot of the menu in two recent visits.

• The charcuterie board ($12) is the place to go if you want to sample a little taste of just about all of Hancock’s meats. A wooden board akin to a painter’s palette bears five rows of colorful, thin-sliced pork goodies: pepperoni-sized rounds of Hungarian sausage, blushing bright red with paprika and offering a balance of chewy pork sausage and spice; salami-style rounds of soppressata sausage, dotted with delicious pork fat; lardo — yes, lard-o, a thin edge of savory pork loin lined with a broad strip of pure, white pork fat, fresh and sweet. Yes, it’s delicious. Just don’t tell your cardiologist. Finishing up the plate is a thin-sliced ration of porky, textured coppa di testa, which I take to be Italian headcheese. It comes with three Chinese restaurant spoons bearing garlicky aioli, sweet-sour cornichons, and a translucent, gently spicy gelée — red-pepper jelly, perhaps. Grilled slices of Blue Dog baguette come alongside, making this not-so-small plate a dish in itself.

• Spicy tuna bruschetta ($4) is a two-bite tapa, or maybe four bites if you eat delicately. A chopped mix of tuna and egg with a hot-and-spicy bite is perched on a square of Blue Dog bread and topped with a silvery pair of fresh anchovies.

• A thick-cut pair of Berkshire pork ribs ($7.50) — oh, my. They weren’t “falling off the bone,” but were gently smoky, with the old-fashioned, distinctively pork flavor of real pastured meat, a pork experience that will put you off industrial pig meat forever.

• A salad-type entry, one of only a couple of items in the house suited for vegetarians, brought together the flavors of roasted red bell pepper, eggplant and mild goat cheese, roasted artichokes and peppery arugula in a symphony of flavor ($8).

• We had to come back another night to try one of the pizzas. This one came sizzling from the 465-degree fire and smoke of the Llopis oven. Our choice, a breakfast-for-dinner pie topped with cut-up poached eggs, thick-cut house-cured bacon, cheese and arugula leaves on a puffy-edged rustic-bread base, ranked among the best pizzas I’ve ever eaten.

With a half-bottle of a Loire Valley red wine, the full dinner evening (with a creme brulée and espresso to finish) totaled $51.98 plus a $12 tip. The return visit for pizza and salad, with craft beers, was $29.82 plus $6.98 for the server.

Red Hog is a shining star on Frankfort Avenue. It’s going to be hard to resist the temptation to come back often.