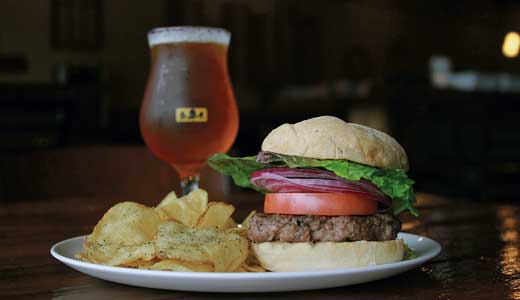 What’s a gastropub? This is more than a trivial question, as more and more open up in the area. Counting eateries that embrace the title, and those that earn it whether they claim it or not, I immediately think of Blind Pig, Bank Street Brewhouse, Village Anchor and Eiderdown. I’m sure there are more.

Now NA Exchange joins the pack, prompting me to repeat the question: What the heck is a gastropub? Is it a neighborhood saloon that serves pickled ginger rather than pickled eggs, beef tartare instead of beef jerky? Or is it a fern bar with microbrewery beer?

Quality beverages are one sure criterion: craft beers, some of local provenance; artisanal wines, as likely to be from France as California; trendy cocktails, if licensure permits. Neither dive bar nor fern bar, the gastropub offers classy cooking and thought-provoking beverages in a comfortable, casual environment.

We’re making some progress here, but these are murky waters. Perhaps it’s best to head straight over to a convenient gastropub and figure it out in person. With that in mind, the other night we shot across the Sherman Minton Bridge and up the hill above New Albany.

At the time of our visit, the name of the place appeared to be “Grand Opening,” but more informative signs may be on the way. It’s not hard to find if you know your way to New Albanian Brewing Co., formerly known as Rich O’s and Sportstime Pizza. Stay in the same shopping center, then proceed south through a maze of parking lots for maybe 100 yards, and you’re there.

Formerly MyBar, a neighborhood saloon with no gastropubbish pretensions, NA Exchange has undergone a thorough interior renovation that confers a more upscale look, but the bones of a friendly tavern remain, and that’s a good thing. Chef David Clancy, formerly of Bistro New Albany and other good local spots, is in the kitchen, and that’s an even better thing.

On Tuesday evenings there’s generally a $2 special, recently taking the form of “Bells and Burgers,” with a draft beer selection from the excellent Bell’s Brewery of Kalamazoo, Mich., and a slightly downsized version of the Exchange burger going for $2 each. That was enough to bring us in. We immediately ordered two-buck glasses of hoppy, crisp Bell’s Two-Hearted Ale and examined the menus.

Subdivided into Starters, Salads, Light Fare and Specialties of the Chef, the evening bill of fare was substantial and varied, ranging from fairly traditional bar food to more upscale gastropub grub; but even the basics generally came with a tasty twist. For example, wings ($7.95) arrive in a generous order of 10, tossed with Vietnamese Sriracha sauce and served with Gorgonzola in place of the usual domestic blue cheese. Hummus ($5.95) adds a dose of smoky chipotle-pepper heat, plus pretzel bread toast in lieu of pitas. Nachos ($6.95) are topped with bison chili, and so it goes.

Four light-fare items were affordably priced from $7.50 for a chicken sandwich made blackened and with smoked cheddar, to $9.95 for the locally beloved fried cod, here dredged in a porter batter. Seven chef’s specialties start at $12.95, including pappardelle pasta with peppers in a spicy tomato cream sauce, with chicken or shrimp. (Enjoy a vegetarian version for $10.95.) The menu tops out at a still reasonable $17.95 for a black-and-blue sirloin, made from grass-fed, natural Virginia beef from Davis Creek Farms, blackened and topped with crumbled Gorgonzola.

We started with a shared order of fried green tomatoes ($5.95), which were just about as good as it gets. Five tangy, crisp thick slices of pale-green tomato were tightly cloaked in perfectly fried batter, golden brown and grease-free, neatly composed on a bed of spinach and artfully decorated with a subtly flavored lemon-dill aioli.

The spinach salad ($6.95) was elevated with toasted walnuts, wedges of hard-boiled egg and, considering the season, a surprisingly juicy tomato. Bacon bits, crumbled Gorgonzola, marinated onion slices and crunchy croutons topped it off.

Mary’s Exchange burger, reasonably diminished in size for $2 night (it’s normally $7.95 for a half-pounder), was excellent — a hand-formed burger, perhaps a bit past the requested medium-rare but still juicy and tender, garnished with the standard lettuce-and-tomato and, for a 50-cent surcharge, crumbled Gorgonzola. The burger was fine and so was its bakery-style bun, and fresh chopped dill tossed with crisp house-made potato chips made them something special.

My more substantial entrée, seafood risotto ($12.95), was a bowl of tender short-grain rice in a fennel-and-lemon scented broth, loaded with tender medium shrimp and fresh mussels in the shell. It wasn’t quite a traditional risotto but a delectable seafood-and-rice dish all the same.

The benefits of $2 night held the toll down nicely: A dinner that surely would have set us back $75 in a Frankfort Avenue or Bardstown Road bistro rang up a $36.47 price on the register in Southern Indiana, and careful, courteous service earned a $9 tip.