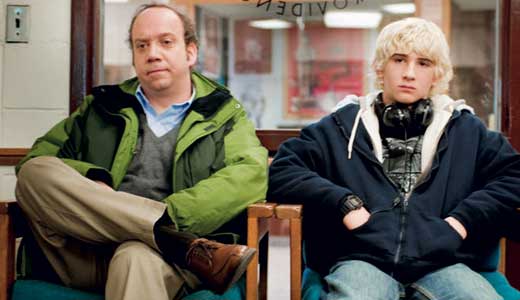 Tom McCarthy hasn’t made a bad film yet. The writer/director’s winning streak began with the “The Station Agent,” his 2003 directorial debut. “The Visitor,” his superb 2007 follow-up, received an Oscar nomination for the performance of its journeyman lead actor, Richard Jenkins. “Win Win,” McCarthy’s most recent and most charming release, opened locally on Friday. Since showing at Sundance this winter, the film has collected mostly rave reviews (at the time of this writing, the “Win Win” Tomatometer is 94-percent fresh).

Although McCarthy’s work varies broadly from title to title, there is one stock device he features routinely: Each of his plots hinges on a stranger coming to town. The filmmaker’s biggest strength is dropping a new player in the tank, and then studying the effects that character has on his surroundings. These strangers are always enigmatic, deeply flawed and against type. True to form, McCarthy has cast Alex Shaffer to fill this role in “Win Win,” an unknown New Jersey teen whose only credit coming into production was a state wrestling championship. No matter, Shaffer is better than adequate in his turn as Kyle.

Shaffer, whose character essentially shows up on the doorstep of a struggling family, manages to be many contrasting things at once — from vulnerable and dangerous to awkward and cool. He’s captured something real about youth, while never tipping off his lack of screen experience. Shaffer becomes the film’s center of gravity and shows he can run with a veteran like Paul Giamatti without upstaging him. This is important, because Giamatti is another reason to go check out this film.

A valuable quality of Giamatti’s is the actor’s ability to skate on ethical thin ice while remaining sympathetic to audiences. There’s something about his hangdog eyes that allow him to further pull us in during moments of moral ambiguity. A scene in 2004’s “Sideways” comes to mind when his character, Miles, extracts a roll of cash from his mother’s underwear drawer in order to fund a bachelors’ weekend in Santa Barbara wine country. The act is, of course, despicable. But a sustained close-up on Giamatti’s expression just before shutting the drawer conveys such conflict and personal disappointment that it’s hard not to experience deeper empathy for Miles.

Giamatti puts this talent to use often in “Win Win,” where he plays Mike Flaherty, a generally well-intentioned lawyer who’s not quite on the up-and-up. After committing a minor abuse of the legal system, the character weaves an increasingly tangled web to protect his original misdeed. Although many of Flaherty’s machinations are wince-inducing, he never loses the audience. Part of this is in the fiendish, guilt-ridden way he smokes only one cigarette in the pack — cueing us in to notion that his ongoing desperation is tearing him apart inside.

The other, bigger detail that keeps us rooting for Flaherty is the genuine love that develops between his family and the wayward Kyle. The affection and concern shared between these characters never feels put on and is surely the film’s biggest victory.