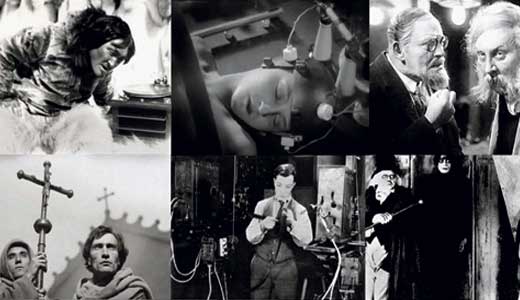 The Dreamland Film Center will open its doors for the first time on Saturday with a fundraiser and special screening of “Six Silent Films in Search of a Soundtrack.” This 16-mm mash-up will feature classics from the pre-Vitaphone era, with live musical accompaniment by Sapat — Louisville’s own jammy, garage-adelic rock collective. If you’re like me and snoozed through some of the quieter moments of cinema studies, “Six Silent Films” might be just the right refresher course. Each of the features will screen side by side during a brisk, 80-minute program.

The 75-seat Dreamland will become the future home of the Louisville Film Society, following four years of nomadic, ad hoc presentations. New LFS members will receive free admission to Saturday’s event. Proceeds from the fundraiser will go toward better outfitting this chapel and former homeless shelter for movie audiences, as well as establishing cine-clubs and LFS filmmaker grants.

Asked how best to digest such a large helping of celluloid, LFS director Ryan Daly says to watch for chance encounters between the different flicks.

“One of the things I found interesting while testing this was the interplay. One film will make a remark about a father, and then another film will seem to answer that remark — this only exists in that moment. I find that relationship kind of interesting, kind of fascinating, really. It’s kind of a Dadaesque take on cinematic narrative.”

The experience sounds not unlike the mid-’90s “Dark Side of the Rainbow” craze, where scores of Pink Floyd fans figured out that the album Dark Side of the Moon and the movie “The Wizard of Oz” are eerily parallel when played at the same time. As for the soundtrack part of “Six Silent Films in Search of Soundtrack,” Daly says there may be no better band equipped for this task than Sapat, whose divergent soundscapes are suited for bridging Buster Keaton to Fritz Lang and German Expressionism to Eskimos.

Daly and Sapat have collaborated before on a similar project, when they ran “Nanook of the North” alongside “At the Autumn River Camp,” a 1967 documentary about the Canadian Inuit. And the big revelation of that experiment was?

“Eskimos rarely change,” Daly says of the two similar films, created nearly a half-century apart. “At times, you’d think, ‘This filmmaker is really homaging Flaherty’s ‘Nanook of the North,’ and then realize he was just honestly documenting Eskimos, whose day-to-day lives haven’t changed for thousands of years.”

Following Saturday’s opening, Dreamland will serve as a venue for the LFS’s Flyover Film Festival in June. Regularly scheduled, weekend screenings are planned to begin shortly after the fest, with hopes of daily showings somewhere on the horizon.

On whether movie theaters are less relevant in a time of advanced home theater systems and personalized, hand-held viewing devices, Daly says it’s important to remember that cinema was established as a community experience. He cites sociological testing done on cinemagoers in the ’70s that showed significant, vital-sign shifts while sitting in the dark with strangers. These reactions — rapid eye movement, changes in heart rate and breathing patterns — mimic how our bodies behave during dream state: something less likely to occur while watching the latest blockbuster on your iPad.

These studies may provide one clue into the name “Dreamland,” but a more direct connection can be found in “The Encyclopedia of Louisville,” which notes that William “Billy” Baron opened a storefront nickelodeon called “Dreamland” on April 6, 1904. The 100-seater was the first in the city to show motion pictures and was located at 434 W. Market St. (the current site of Dish on Market and a 1-mile straight shot from LFS’s new theater).