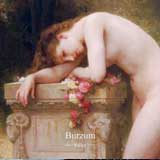 Convicted murderer Varg Vikernes has led an interesting life. He’s a long way from his black metal roots on Fallen, a sweeping, symphonic goth-metal hybrid that conjures mysterious wastelands and cold, dark nights. Vikernes’ vocals range from spooky whispers to guttural bellowing, with plenty of spoken-word interludes thrown in. That the lyrics are sung in Norwegian makes Vikernes’ voice another texture among the instruments. The album is book-ended by two ambient tracks — as if this stuff isn’t weird enough to begin with — but the heart of Fallen is an epic Wagnerian slab of tremolo-picked Eurometal called “Budstikken.” The tracks all share certain similarities, as if the disc were conceived not so much as a group of songs but as movements in a symphony. It doesn’t all sound the same exactly, but the fact that Vikernes played all the instruments does lend a certain homogeneity to the proceedings. Not the most accessible cup of tea, perhaps, but engaging and intense.