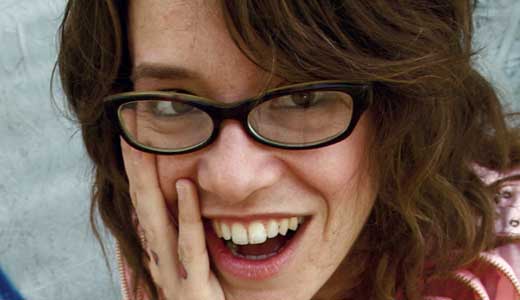 Why should rock ’n’ rollers have all the fun touring the country? That’s what poet and writer Michelle Tea asked herself before creating Sister Spit, a traveling show of queer-centric, spoken-word artists, in 1997. Tea, author of “Rose of No Man’s Land,” “Valencia” and “Rent Girl,” hosted successful weekly open mics in San Francisco in the ’90s and wanted to bring the show and its regular contributors to towns small and large. Now on its second tour, Sister Spit stops at U of L’s Red Barn on Monday. LEO caught up with Tea in a van just outside of Seattle.

LEO: How did Sister Spit come about?
Michelle Tea: It was a response to all the open-mic nights that were happening in San Francisco — they were popular but tended to be super male. I liked going, and I met some girls who were brave enough to jump up on stage and do it. You just had to tell people to shut the fuck up before you read your poem. Not everyone likes to do that. So I got together with poet Sini Anderson, and we created Sister Spit.

LEO: How is this tour different from your first cross-country trip?
MT: We became trans inclusive and started including guys. Now we just bring whoever fits with our aesthetic. It’s very smart and informed by radical queer politics, and it’s also sort of irreverent and provocative … with a dark sense of humor. If you can roll with that, you can get in the van.

LEO: When stopping through the “flyover” states, is there anything surprising you’ve experienced?
MT: You know, when we went on tour in the ’90s, there was a lot more concern about that, because it was a different time, and we were all a bit younger. San Francisco is such a bubble of safety, which is why so many queer people move there. We definitely had a few weird moments, but I never had any fear.

LEO: Tell me about some of the people in the van with you.
MT: Myriam Gurba is the author of the book “Dahlia Season,” a collection of short stories about a teenage queer goth girl. She is really amazing. She has this deadpan reading style, but she’s reading stuff that is so complicated and darkly funny. The audience feels really electric when she’s up there. There’s MariNaomi, cartoonist and creator of the ’zine “Estrus.” Kirk Read is a writer and performer. He does a lot of performance art in San Francisco. He’s reading short stories that are pretty much personal narratives … very much about queer life. And he wears a different costume every night, so that’s exciting. Blake Nelson has written a lot of young-adult books. His book “Girl” was made into a movie in the ’90s. He also wrote the book “Paranoid Park,” which that Gus Van Sant movie was made from. And Amos Mack is a photographer and publishes Original Plumbing, a groundbreaking magazine that is by and for the trans-male community.

LEO: What are you working on now?
MT: I have finished two books. One is a strange, enthralling narrative — it’s part memoir, part magical realism/science-fiction stuff. I also wrote a young-adult fantasy book my agent is currently shopping.

LEO: And what about your collaboration with Beth Ditto on her memoir?
MT: I wrote it for her based off of a series of interviews I did with her. I have no idea when that’s going to be out … it keeps getting bumped. Hopefully soon!

LEO: Your book “Valencia” is being made into a series of short films. What’s your role in this?
MT: I thought it was a fun idea. I was kind of sitting on it for a while. It’s kind of improbable to expect 21 filmmakers to take so much work to make a short film. I mentioned it to some of my filmmaker friends, and they got really excited about it. And so I was inspired to do it. It’s gotten a lot of support. It’s a monster of a project. There’s a push to get it done by the fall, but I guess we’ll just see how realistic that is.

LEO: You started out as street poet/writer and didn’t go the academic path. Does this continue to influence your work?
MT: Oh I’m sure. Definitely. And I think it influences my larger worldview and reference points I work with. And it no doubt influences the paths of access I’ve had as a writer, and continue to have or don’t have.