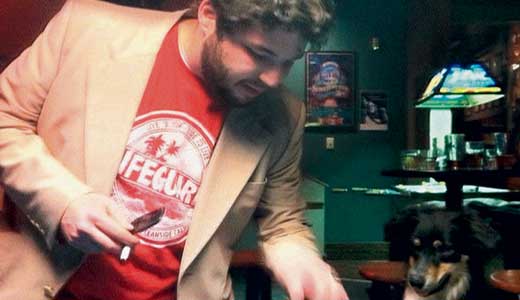 A local bar has emerged as the watering hole for Louisville’s most talented artists of all mediums — sort of our own twisted take on Oxford’s Eagle and Child, where people like C.S. Lewis and J.R.R. Tolkien regularly met for cocktails and conversation. It’s a place you’ve driven by a thousand times and perhaps never noticed beyond the portrait of William Shakespeare on the front sign. It’s called The Bard’s Town, and for the past few months, it’s been hosting one of Louisville’s freshest, most original shows — “The Young, Dumb, and Full of Comedy Show.”

“(The Bard’s Town) has this amazing little alt-comedy room. It’s nice looking, it’s small and intimate, so it gets packed quickly. But you also have this nice, elegant, laid-back vibe that is perfect for a comedy show,” show founder Raanan Hershberg says of the bar, which is located at the corner of Bardstown Road and Speed Avenue.

Starting out as a whisper, the show is steadily turning into a local roar. “The idea behind the show is …,” Hershberg pauses to think for moment. “Well, there’s selfish reasons and selfless reasons. The simple, selfish reason was to put on a show so I could have more stage time personally. And the selfless reason is to put on a show that can appeal to a younger crowd who tends to not go to comedy clubs but likes comedy. And it gives an opportunity to other comics to stretch out their wings and do the kind of material they can’t really get away with in the clubs.”

“The Young, Dumb, and Full of Comedy Show” has taken a cutting-edge approach to what a comedy show can be. Put on every other Friday night, the free show has a floating structure and rotating line-up, which creates an undeniable spontaneity with every performance.

Originally launched in February by Hershberg with the help of some of his comedian friends, all stalwarts on the local and regional circuit, the show has grown organically to become one of the premier showcases in the city. “I have the main crew of comics — we all started around the same time — all of which I think are really great: Lindsay Boling, Sean Smith, Tyler Jackson, Craig Williams, Patrick Passafiume and Mark Parris. I want them to do it whenever they can, which will probably be when they have new material. But right now for every show, we’re trying to get different people onstage.”

Whether the show spreads by word of mouth or through social networking, it doesn’t particularly matter; what does matter is that Hershberg’s show only seems to be getting bigger. This isn’t just about the up-and-comers on the scene, either; the show has played host to some of the more established names around the area — people like Ben Moore and Sarah Hyland have already performed at The Bard’s Town. This week’s performance will feature a headlining set from local comedian Will Hardesty.