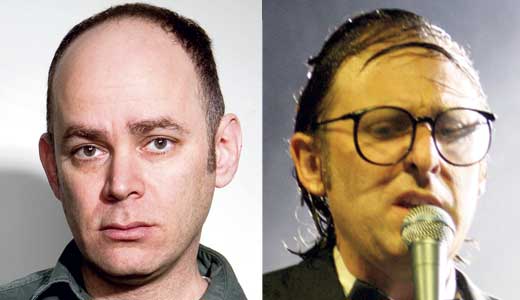 Comedy ninja Todd Barry is one of those performers whose names you don’t immediately recognize, but you’ve probably seen him before — he’s had roles in movies like “The Wrestler” (he played Randy Robinson’s manager at the supermarket) and TV shows like “Louie,” “Bored to Death” and “Flight of the Conchords.”

But first and foremost, Barry is a stand-up comedian, and a damn funny one at that. His deadpan style is conversational and subtle, so the punch lines sneak up on you. Like this one: “I had sex recently. I took out the box of condoms. She takes the box from my hand, looks at it and goes, ‘Hey Todd, good choice.’ Good choice. I didn’t expect her to be a virgin, but this is no time to show brand loyalty.”

Or this: “I never understood the concept of summer school. The teacher’s going to go up there and go, ‘OK, class, you know that subject you couldn’t grasp in nine months? We’re going to whip it out in six weeks.’”

Barry is embarking on a national tour this season called the “Spring Value Tour 2011.” Along for the ride are support act Brendon Walsh (no, not Jason Priestley’s character from “90210”) and Barry’s co-headliner, Neil Hamburger.

“Neil and I were somewhere, I don’t remember where, and he suggested we do a tour together,” Barry says about the tour’s impetus. “That’s it. Not the best story, but a true story.”?

Hamburger’s style is much different from Barry’s. I won’t spoil the surprise for the uninitiated, but let’s just say Hamburger takes a character-driven approach to the comedic arts that’s not entirely dissimilar from, say, Andy Kaufman’s.

“I love Neil’s act. We’ve worked together several times. He’s one of the few comics I could watch a lot, because every show is different,” Barry says. When asked if he thought audiences might have a hard time adjusting to Hamburger on Spring Value Tour, Barry says, “Yes — that’s why I’m going on before him.”

Like most comedians in the 21st century, Barry is active on social networking sites, especially Twitter. In addition to promoting upcoming shows, he lets fly the occasional joke. Sometimes he combines the two, as with this recent tweet from April 3: “Use your Charlie Sheen refund check 2 see me @NeilHamburger @brendonwalsh http://bit.ly/toddneil SPRING VALUE TOUR starts 4/7!”

“Before I tweet something, I have to decide whether it would work in my act. If I think it would, then I probably would save it for the stage. But there are a couple of tweets that I will talk about on stage, with additional commentary,” Barry says. “Or maybe even jokes.”

Barry performed in Louisville a few years ago, opening for Louis CK at the Kentucky Center. Anything memorable from that gig? “Nothing crazy happened,” he says. “I did eat a good dinner at the restaurant that’s part of a hotel that has ‘museum’ in it. Maybe they’ll read this interview and offer me a free meal while I’m in town.”

The tour comes to Headliners on Thursday. While it has hosted comedy shows before, Headliners is not, strictly speaking, a comedy venue, but the booking is more of a logistics issue than any deliberate attempt to strike a blow against the tyranny of local comedy clubs.

“It would be hard to do a tour like this — nine cities in nine nights — at comedy clubs, because they usually book one person for a long run. But for most of the shows, we are going to have chairs put out, so it’s a little bit more comfortable. I don’t know how nice the chairs will be, but they will be chairs.”