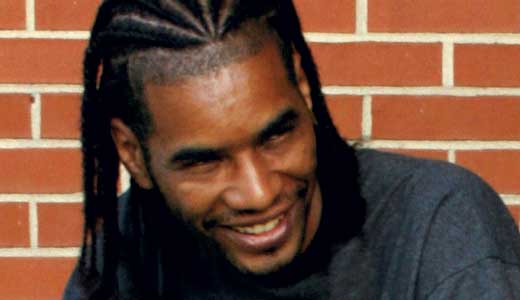 Originally from the Ohio city from which he takes his name, Cleveland Jackson came to Louisville — Middletown, more accurately — with his mother as a teenager. After graduating from Eastern High School, Cleveland tried his hand at being a U.S. paratrooper and a strip club DJ before finally finding his footing as a comedian. This weekend, “Cleveland’s Rock Star on a Budget Show,” an idea he’s been performing sporadically for seven years now, comes to the Comedy Caravan. It’s a multimedia extravaganza that bounces from hilarious short films to a rotating line-up of local comedians to live music — happening all on one stage. We sat down to talk at Quills Coffee Shop in the Highlands.

LEO: What was the genesis of “Cleveland’s Rock Star on a Budget Show”?
Cleveland Jackson: Conversations with musicians and comedians, and everything we have in common. Every musician I know just wants to be funny, and every comic I know has always wanted to be a rock star. And what I mean by “Rock Star on a Budget” — we go out and peddle our magic and our passion to the masses, and at the end of the night, we’re rock stars, but we also have to try and figure out how we’re gonna pay our bar tab.

LEO: So what does the show feel like as it’s happening?
CJ: It’s more of a gathering than a show — a gathering of comedians and musicians doing what they do. And it’s gonna be different shows every night, because I’m gonna have different comics every night. There’s a number of really great comics in this town that I’m going to be rolling out from Wednesday through the second show Saturday.

LEO: When did you know it was time to pursue comedy as a career?
CJ: You never know. You’re presented that situation. There comes a day that I like to call “Quit Day,” the day you decide you’re gonna quit your job and do this.

LEO: Do you still remember your first time on stage?
CJ: Absolutely. It was the second Tuesday in March of 1997 at Comedy Caravan. They gave me three minutes … I took eight, because I was so nervous I couldn’t see the light they were flashing to get me off stage. When your heart is pumping that fast, you can’t hear anything, you can’t see anything. But I was ready; I’d been waiting 20 years to do that.

LEO: What was the best advice you were ever given?
CJ: It gets better, but it never gets any easier.

LEO: What’s the best advice you can give now that you’re the one dispensing it?
CJ: Make every show count. Even the bad sets are good sets because you learn something new.