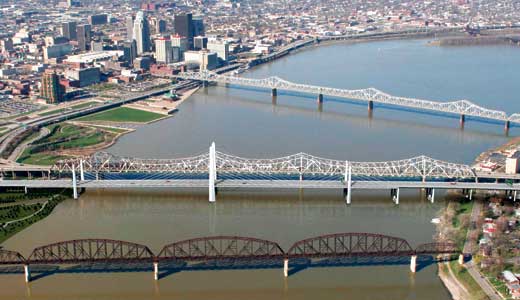 The proposed reduction in the controversial Ohio River Bridges Project continues to generate mixed reactions ranging from celebration to skepticism among opponents with mixed agendas.

In January, the governors of Kentucky and Indiana and Louisville Mayor Greg Fischer announced a plan to trim $500 million from the cost of the $4.1 billion project by rebuilding Spaghetti Junction in its current footprint rather than to the south; cutting lanes from a new eastern bridge; and removing pedestrian pathways from a new downtown span.

“I went into celebration mode when I heard they were going to reduce it,” says bicycle shop owner and public transit advocate Jackie Green, “because it’s going to take all sorts of time to re-evaluate — to do an environmental study. They’re opening up a can of worms here.”

The alteration of the project and the plan to impose tolls have triggered a Supplemental Environmental Impact Statement officials hope to complete within a year.

“They sabotaged the bridges project by setting it back for a whole new review. They said all alternatives are on the table; public transit is an alternative,” Green says. “I celebrate the postponement. It buys time for things to happen that will enlighten us, such as $4-per-gallon-plus fuel.” Green notes Louisville’s recent ranking among the 10 best cities for commuters in Kiplinger’s Personal Finance magazine. “Even with a sorry public transit system, we rank No. 9. We don’t need more roads, bridges or interstate highways. Give us public transit, and we’ll be No. 1 in this nation.”

Green is a former member of — and remains philosophically allied with — the Coalition for the Advancement of Regional Transportation (CART), which also welcomes the project review.

Last year, CART unsuccessfully sought to join a pending lawsuit filed by River Fields, a local conservation group. In its motion to intervene, CART claimed the Federal Highway Administration violated the National Environmental Policy Act by “intentionally or recklessly” failing to provide a “full and fair analysis of public transit alternatives” that “would eliminate or greatly reduce the need for” the Ohio River Bridges Project.

In response, the FHWA said it evaluated and explained the rejection of three mass-transit alternatives ranging from an all-bus system to three light-rail lines and a new bridge, which CART maintained wouldn’t be necessary given the existence of railway bridges that could be used.

In a letter sent to FHWA Secretary Ray LaHood late last week, CART cited “compelling reasons” why the supplemental review should reconsider multiple modes of transportation. They include 1) exaggerated traffic projections downtown and the potential for tolls to depress motoring, 2) the substantial rise in oil prices, and 3) unanticipated sharp cuts in TARC’s service and budget.

A supplemental study that includes “an assessment of the impact of oil prices on construction costs, long-term maintenance, highway budgets, and the mobility needs of the population, a significant portion of which does not have the financial or physical capability to own or operate a personal motor vehicle,” the letter continues, “will more accurately address our needs and ensure our investments are logical and sustainable.”

Paul Fetter, co-founder of Southern Indiana’s No 2 Bridge Tolls group, says he was excited by the proposed downsizing “because they had told me for months that the project couldn’t be changed.” But he’d be more gratified “if they decide to make more changes.”

He thinks tolling would disproportionately burden Hoosiers, disadvantage Kentuckiana in competing for regional and national events, and thwart cross-river mobility and commerce. “Indiana has to go to Kentucky for many things, but Kentucky doesn’t have to come to Indiana for hardly anything,” he says.

Although Fetter has argued in favor of making further reductions to try to get a no-toll rate for local commuters, he says the uniform response has been: “The Federal Highways would never allow us to build a project and not toll the community that’s going to use it.”

Fetter has no problem with tolling the East End bridge, but he adamantly opposes tolls on existing infrastructure and thus delighted in the elected officials’ announcement of their desire to keep free the Sherman Minton and Clark Memorial bridges.

He’s glad for Butchertown that Spaghetti Junction is no longer slated for relocation on the historic neighborhood’s shoulders, but he believes the bridges project still needs to “cut a ton of money out of Spaghetti Junction.”

Officials say the lion’s share of the estimated half-a-billion-dollar savings would come from reconstructing the junction
in place.

“If they’re planning on building it as big, in place, then it’s actually more expensive,” he says. “I assume they mean they’re going to do something reduced. How many lanes is that?

“The public doesn’t have enough information yet — and yet we’re getting ready to go into public hearings in June,” Allen adds. “What are we to respond to, exactly?”

Project officials say they’re considering about a dozen variations on an alternative that was rejected during the five-and-a-half-year process that led to the approval of the project in 2003. The Record of Decision, which details that process, explains why: “congestion and safety problems during the construction period,” and “by 2025 … significantly greater congestion and delays, which would likely spill over onto adjacent roadways, including the Kennedy Bridge.”

Nevertheless, engineers hope to enhance safety by eliminating left-hand exits and forced weaving — and reduce costs by preserving sections of the existing interchange.

Allen is wary of the danger of “massive traffic issues” during construction downtown and questions the math and the logic of the revised plan.

“The very concept that you’d shrink the East End bridge (to four lanes from six) and yet leave 12 lanes across the river downtown — where the real cost is — doesn’t make any sense,” he says. “What reductions would there be in the scale of Spaghetti Junction? Unless you shrink the scale, you don’t save any money.”

Allen also decries the plan to convert shoulders to lanes in the east, if needed. “That’s the very thing they’ve been moaning about for years on the Kennedy Bridge” as a safety hazard, he says.

Steve Wiser, a local architect who has offered several alternative proposals, wants the final design to minimize the risk of a traffic shutdown. Accordingly, he advocates that both I-65 bridges carry two-way traffic. (Under the current plan, the Kennedy would be southbound only while the new downtown bridge would be northbound only.)

Engrossed stakeholders wonder whether the project would have been built by now had the cheaper (in-place) junction alternative been selected a decade ago. The lawsuit by River Fields and the National Trust for Historic Preservation against the Federal Highway Administration remains a major threat to progress. Monthly settlement talks continue, but all deadlines have been stayed pending the completion of the supplemental environmental review. Meanwhile, officials insist they’re on schedule to break ground in August 2012.