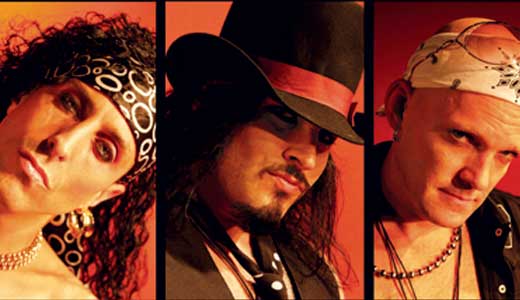 Once a fan, always a fan. That’s the glass-half-full version of my truth. Others might say I’m a lot like herpes — impossible to get rid of and annoying to be around. I’m gonna shoot for somewhere in the middle — I’m kinda like a white stain on a blue dress … I may get you into trouble, but I remind you of fun times.

I like what I like and am a creature of habit. I’ll never disrespect Zima, because Zima helped get me where I am today. If I let you into my world, you are a friend for life. Letting go does not compute. I sleep with stuffed animals I’ve had since childhood. My heart races when I hear a Debbie Gibson song. I know what Bo knows. I still have a crush on Kirk Cameron and Alyssa Milano. I like Motley Crue as much as the new Adele.

For therapists, I’m a dream project. For exes, well, I’ll refer you back to the herpes comment. But for friends, bar owners, crap beer companies and out-of-style bands, I’m unwavering in my devotion. And this brings me to my point — the Velcro Pygmies are playing Tuesday at the Chow Wagon!

I think I’ve talked about the Pygmies in these pages almost as much as the Back Door. Former editors rolled their eyes whenever I pitched a staffpick or cover story on the glam band. When I first moved to town 11 years ago, I latched onto them like a barnacle on a sunken battleship. I showed up to every gig … sometimes twice in one weekend. I stalked the members, who hopefully see me more as the white stain than the itchy sex disease. I took their Blow Pops in my mouth with my hands behind my back (a Pygmie ritual) more times than I care to admit. My bra was hoisted onto the ceiling fan at Phoenix Hill Tavern. I traveled to Alabama to see them.

They don’t come back to town often, although they started here more than 20 years ago. Members include lead singer Cam, drummer Chris, bassist Johnny Depp and lead guitarist Angel. If you can’t shake off the ’80s by squeezing yourself into skinny jeans and wearing ironic T-shirts, then I think you might enjoy the band’s sound, stage antics and overall don’t-give-a-fuck-if-we’re-cool attitude.

I exchanged a few emails with Cam last week, and he was excited to share the news that the Pygmies have added a horn section to their show, which makes Tuesday’s concert somewhat a new experience, right? He also told me they recently opened for Snoop Dogg. Can’t wait to hear how “Pussy Whipped” sounds through a trombone.

Tuesday’s Chow Wagon show starts at 8 p.m. at Waterfront Park. It’s free with one of those dumb flying horse pins. The Pygmies are also playing Derby weekend at Phoenix Hill. Check out my blog, barbelle.leoweekly.com, for a full interview with Cam.

Juleps abound
Last week, I was a judge for the annual Four Roses Mint Julep Contest. I had to generously sip through 14 juleps to proclaim a winner. After the fourth one, I forgot my name. (Only kidding, devoted contestants.) For the third year in a row, Rory McCollister of Varanese (2106 Frankfort Ave.) won the Best Julep title with his “Triple Crown Mint Julep.” It was delicious … but I can’t quite remember why. I can tell you that Varanese is currently serving them up, so stop by and try one. I may need a refresher course myself. The other winners include: Brad Jennings of Lilly’s (second place), Gary Gruver of Martini’s Italian Bistro (third) and Emily Hornback of Limestone (fourth).

Drunk Texts of the Week
• had ky derby sex … 2-minute ride
• Strap-on on the brain
• hes jst n love wth my tail pipe
• rain is shit, shit is rain
• The river is inching in like my sobriety
• Nothin says easter like a half-nekkid cher