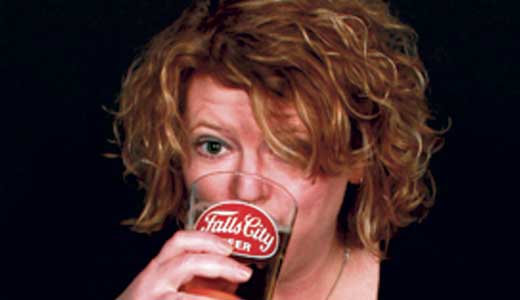 So yeah, there I am in that there picture. That’s what I look like. I’ve spent years as Clark Kent, hiding behind the guise of the little drunken purple Bar Belle character. Even though I look nothing like her, she was a part of me. Perhaps she’s the crazy person I turn into when I’ve had too much to drink. The bathroom stall as my telephone booth, I run in, do my business, gussy up my hair and rush out to rescue drunks everywhere by one-upping them on stupid things to do — Southern Belle by day, Bar Belle by night.

It wasn’t an easy decision to reveal my true identity. I like not being recognized and called out for pontificating on the truths of Louisville drinkers. I like hovering in the shadows and observing bar life at liver’s length.

So why come out to the public and show my face? Two reasons: A) It wasn’t really my decision but that of creative director Britany Baker … who hates clipart a little more than she does domestic beer. She’s been threatening to get rid of my character for years. She finally broke down my resolve with a fifth of bourbon. B) A recent email by genius reader Greg Ammon made me rethink my stance on staying in the shadows. “I think if the general public knew what you looked like, you probably would never have to buy your own drinks again,” he wrote. That’s certainly something to consider. I suppose we’ll have to put this theory to the test.

Battle of the Bands

A while back I wrote about musicians I would include in my ultimate band, and I asked for your thoughts on the subject. I got great responses. Here are some of my favorites.

• “I lean more toward the rock side than pop music, so I will say for lead singer: Annie Lennox; lead guitar: Joe Satriani; bass: John Entwistle; drums: Neil Peart; keyboards: Manfred Mann; backup vocals: k.d. lang and Michael McDonald; merch table/publicist: Gene Simmons (let’s face it, he could sell ice cubes to Eskimos); and for lack of a better name, I would call them “Better Than Better Than The Beatles.” —Greg Ammon