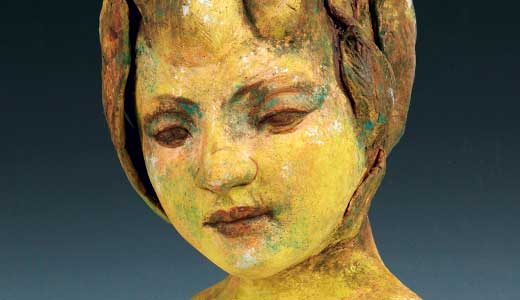 Imagine a white room full of objects arranged as reverently as monuments in a gothic cemetery: A metal pole as tall as a person holding an armload of glass orbs like a cluster of suspended pomegranates. A toy train made from chewed bubble gum. A fan of thorns emerging from the wall like terrestrial coral. These sculptures, presented by the ENID collective at the Carnegie Center for Arts & Culture, together compose an entire garden of monuments dedicated to the legacy of a single woman, Enid Yandell, the matriarch of Kentucky’s female sculptors.

Although Yandell worked on the women’s pavilion at the 1893 World’s Columbian Exposition in Chicago, studied in Paris with Auguste Rodin, and was inducted into the National Sculpture Society in 1899, she may be most well known to most of us for her enduring local legacy: the iconic bronze Pan atop Hogan’s Fountain in Cherokee Park.

Almost a century after Yandell’s death, the 16 women who compose ENID, despite varying in age from 38 to 88, have pooled together to find strength in their common identity. Their diversity is on full display at the Carnegie Center, with works ranging from Valerie Sullivan Fuchs’ high-tech interactive sculpture, “XXYY” — which is experienced by placing one’s hand under a tiny projector and watching a kaleidoscope of ballet dancers perform on the palm — to the primal stillness in wood-carver Jeanne Deuber’s holly and sycamore “Intimacy.”

Sarah Frederick’s “Golden Delicious,” a light box covered in handmade paper, is a portable autumn, while Cynthia Reynolds’ bubble-wrapped and metal-ringed “Chainmail” is a thoughtful take on the fallacy of the armor we make for ourselves. An original work by Yandell is also on display — a bronze, reclining female at the center of the room called “Untitled (Doorstop).” It’s an instance of curatorial brilliance, as the work was made by the woman who opened the door for those who were to come after her.

The question must be asked: “Is having a show based on the gender of the contributors passé?” It would be, if all the women had in common was their biology. But the show is based on more than just the sex of its artists — they also share a regional and vocational identity. These women obviously feel they need a community centered around these aspects of their identity, which is most likely an indication that those parts of their identity were either being devalued or ignored in other organizations.

Accompanied by an elegant essay by co-curators Karen Gillenwater and Leticia Bajuyo that acknowledges the congruence of the aims of the Carnegie Center with those of the ENID artists, the show also accomplishes the important task of celebrating the artists while they are still alive. It effectively displays the depth and breadth of sculptors who work in our midst, and offers an awareness of the growth of opportunity for all women in the arts in the last century.