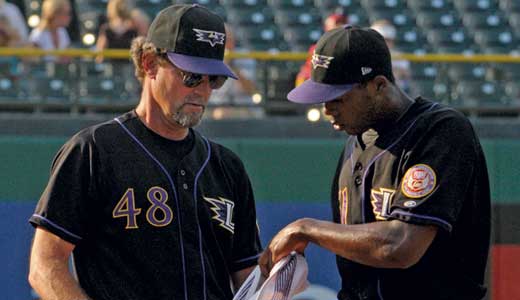 The truth is, most fans come to the ballpark to see the hitters hit. About all they ask from their hometown pitchers is to get the opponents out with as little damage as possible — so the batters can get back up to bat. Fans cheer mightily when a hitter whacks one over the fence, then clap politely when their hurler sets the other side down one, two, three.

And nowhere is that more evident than in Louisville, where potent pitching has helped the Triple A Bats to three-straight International League divisional championships. The Bats are off to a 9-2 start this season (through Sunday). Louisville also has been the final minor league staging area for a raft of sharp young arms moving along to major league parent Cincinnati Reds — helping the Reds last season win their first National League Central Division championship in 15 years.

“The whole organization is packed with pitching talent,” says Louisville newcomer Scott Carroll. The tall right-hander has come up the Reds’ minor league ladder and was tabbed as the Bats opening night starter. Carroll held sway throughout most of his debut, though rocked at one point with a three-run home run.

“I’m a strike thrower, so obviously I’m going to give up some base hits — because I’m throwing in the strike zone.” Carroll says. But he also thinks throwing strikes will help him stand out in a crowd of pitching talent. “That’s what I’m going to do,” he says. “I’m going to fill up the strike zone with strikes.”

In another way, left-handed reliever Jeremy Horst also has a plan for moving up in the organization.

“I’d been starting, and when the Reds moved me to relief, I first saw it as a setback,” Horst says. “But then I decided to unpack a lot of what I was thinking and just be ready to go wherever they want me, and do whatever they want me to do.”

“Right now,” Horst adds, “they want me to be able to go one inning (like a traditional late reliever), or four innings (as a middle reliever.) Early in the game or later — just whatever it is, be ready.”

Bats manager Rick Sweet says that besides talented arms, the secret of a strong staff is stability — a tricky goal in Triple A baseball, with players frequently moving back and forth between rosters in Louisville and Cincinnati. Up and down I-71. (And watch out for that speed trap in Glencoe!)

A good example of how Sweet derives success from what might otherwise be chaos came last weekend when the Reds sent two disabled-list starters, Johnny Cueto and Homer Bailey (both former Bats, incidentally) to Louisville for rehabilitation assignments. Cueto and Bailey will pitch here to ready themselves for a return to active duty with Cincinnati. The big league team calls the shots on when rehabbing pitchers will pitch, and how many innings they will work. So it wasn’t Sweet’s decision that Cueto would go five innings Saturday and Bailey five on Sunday. But it was his job to make that work.

When Cueto floundered on Saturday, Sweet brought on Horst to right the ship. Sweet’s plan for Sunday was to hold regular starter Tom Cochran out of the game as Bailey threw five innings, then bring Cochran on to finish. The Bats manager tweaked that a bit by calling on relief pitchers to follow Bailey, hoping to give Cochran the day off.

But when Indianapolis rallied in the ninth to send the game into extra innings, Sweet had his man Cochran warmed up and ready to go.

Funny how that turned out: Cochran pitched four shutout innings and got the win when Bats outfielder Brian Barton finally sent everyone home happy with a two-run homer in the bottom of the 13th inning.

Cochran had made it look easy, but Barton got the big cheer for the big blast.

Well, Sweet’s moves come pretty much out of the same “book” most managers follow. It helps that Louisville has the pitching talent to make the plans pay off. And, over time, the success of the team breeds confidence.

“I think the biggest thing pitchers always want is to put them in a role,” says Sweet, now in his 23rd season managing and seventh at Louisville. “Something to where they can say, ‘This is where I am going to be pitching right now.’ Something they can prepare for mentally. Then I have to make sure not to change the roles on them. Like Cochran today. I was either going to pitch him right behind Homer, or use some other guys, and if we went extra innings he’d get the ball. And he knew that.”

The biggest Bats news right now is the addition of former Florida Marlins star Dontrelle Willis, who Cincinnati scooped up off the discard pile and has assigned to Louisville. Willis, the National League Rookie of the Year in 2003, a 22-game winner in 2005, and a two-time All-Star, was struggling in recent seasons. But the Reds took a chance, and so far the left-hander has looked terrific.

And anyone who remembers Willis’ big years might recall that the big fellow can also hit. Really swing the lumber. Which, of course, he was begging to do Sunday when the game went into extra innings.

“Yeah, he was lacing up his spikes where I could see him, and he kept telling me he was ready to hit,” laughed Sweet. “I told him, ‘There is no way you’re going out to pinch hit, Willis.’”

Not with the way Willis has won his first two games. Not allowing a run, and “sawing” bats off in the hitters’ hands. Willis’ first night on the mound at Slugger Field he allowed three hits — one bloop, and two bleeders that barely made it out of the infield.

“Dontrelle’s start the other night was really nice to watch,” says pitching coach Power, himself a 10-year starter in the major leagues. “He didn’t change his effort level more than two or three times all night long — to where he added a little bit more than what looked comfortable. Just kept it steady. That’s a smart pitcher. He was making his pitches. Putting the ball in play.”

Power understands pitchers are most effective when they work like a machine. And sometimes, a high-performance machine needs just a bit of fine-tuning.

“He’s very receptive,” Power continues. “We’re doing things in his bullpen sessions, maybe they’re going to help him. It’s nothing major. I’m not a guy who is going to try to recreate some pitcher. Especially somebody who has had the success he has.”

Veterans or rookies, stars or prospects — the pitching seems to keep on coming for the Louisville Bats. And maybe deserving of a nice hand (no wild cheers, please) the next time a Louisville hurler sets the side down one, two, three