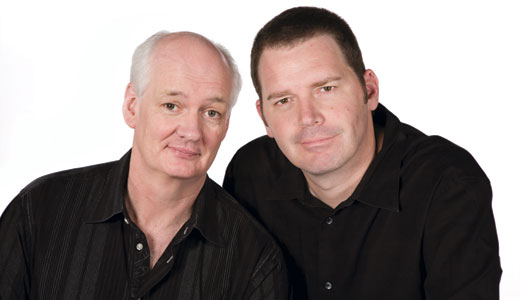 One of the saddest atrocities committed by Disney Corp. after buying ABC was its persecution of Drew Carey and his amazing band of comics. Here Colin and Brad, from the late, lamented “Whose Line Is It Anyway?,” keep their free-wheeling brand of audience-participation improvisation alive to packed houses. Some of the funniest, most spontaneous comedy we’ve seen in years. Recommended.

As far as we can tell, this is a first: The first all-Joel MST3K boxed set! Joel Hodgson, of course, was the original creator of MST3K, based on his stand-up act (often featuring hot-glued robots), so these represent some of the earliest Comedy Central shows, long before being purchased and ruined by the SyFy. Lots of great convention goodies, interviews and intros, plus “Project Moonbase” (with Commando Cody shorts!), “Master Ninja I,” “Master Ninja II” and one of their greatest riffs, “The Magic Voyage of Sinbad.” A must-own.

APHRODISIAC! THE SEXUAL SECRET OF MARIJUANA

Most people know that the first concert at Shea Stadium was The Beatles in 1965, but over the next 45 years, it hosted all manner of rock royalty on a regular basis. This two-and-a-half-hour video celebrates the final performance there, in 2008, by Billy Joel, with special guests Paul McCartney, Tony Bennett, Garth Brooks, John Mayer, John Mellencamp, Steven Tyler and Roger Daltrey. (Also available, scattered across scores of other concert videos, are Shea performances by The Who, The Police, The Rolling Stones, Bruce Springsteen, The Clash and many others. Would make a neat collection.)

First Blu-ray release of one of the greatest movies ever made. John Boorman smeared mud and blood on shining armor to immortalize the Knights of the Round Table, led by Nigel Terry and Helen Mirren as Arthur and Morgana. But the real casting genius was in hiring Nicol Williamson as the all-too-human Merlin, who could only stand and watch as all of humanity was lost to a woman’s revenge. Even the lesser co-stars read like a “Who’s Who,” with Liam Neeson, Gabriel Byrne and Patrick Stewart, to name a few.

An unlikely farce about terrorists and the inherent folly in almost any human endeavor. A group of Limey jihadists have high hopes and ideals, all of which go spinning ’round the bowl as their competing ideologies make cooperation impossible. A funny movie without a single fart joke.

Johnny Knoxville, Steve-O, Bam Margera and the rest of the juvie-squad are back, this time in 3-D (if you so wish). If you need to know more than that, you’re not interested.

A quartet of offerings from Kipper, the animated dog from PBS, based on the writings of British author Mick Inkpen (and, no, we didn’t make that up). One of the best preschooler series we’ve ever seen, and nary a product placement in sight. Seriously, if you’ve got wee ones, check this out.

This did zero box-office business, but there’s a lot to like as a pair of couples from different generations — Harrison Ford and Diane Keaton; Rachel McAdams and Patrick Wilson — find that love can bloom anytime, anywhere. Corny? You betcha! But well-written and performed by vets who know how to make words crackle. A great date flick.

The son of Hayao Miyazaki helmed this major hit in Japan, but it became an object of protest in the bargain. On one side, his father’s fans, expecting to see Hayao Miyazaki’s lyrical animation style, were dissatisfied by Hayao’s efforts — despite their being exceptional. And fans of Ursula Le Guin’s “Earthsea” novels didn’t like that he dared combine several plotlines into a single movie, instead of doing a series of movies, one on each book. All that aside, this is as solid and entertaining as any animated title we’ve ever seen. Just buy it.

THE NEXT THREE DAYS

This was all but stillborn at the theaters, which is surprising considering the talent involved. Written and directed by Paul Haggis (“Crash”), the film stars Russell Crowe as a man who is crushed when his wife (Elizabeth Banks) is sentenced to life imprisonment for murder. But he’s no super private-eye — he’s a schoolteacher completely at a loss as his family disintegrates around him. Yeah, it’s a bit dark at times, but all good thrillers are. Worth your time.

For all you salivating zombie-heads out there: a two-disc set with all six episodes, “making-of,” commentaries from the series creators, a sneak peek at Season 2, zombie make-up tips, convention footage and much more. We all know the plot. It’s the same in every zombie tale: A group of people try to survive after an undead apocalypse puts them on the menu — but the real trick is learning to live with each other.

A fun, gay rip-off of the “Twilight” franchise, with lots of hunky guys showing off their six-packs under black leather jackets, taking turns sucking, uh, blood from the populace while seeking “The One” to help them ascend. Or something like that.