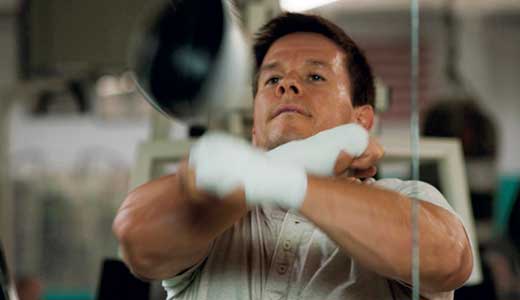 An intensely simple, yet provocative and complex movie about real-life boxer Micky Ward. Simple: Two brothers join together to train for a historic fight. Complex: Two men deal with decades-old wounds, the loss of family, the scourge of drugs, the search for love, the hopes and fears of their neighbors, and on and on — complex, real life. With Mark Wahlberg and Christian Bale as the brothers and Amy Adams as the girl. As good a movie as we’ve ever seen. Period.

This didn’t get much time at the theater, but there’s a lot to like here. Like Jennifer Aniston. Have you ever seen a hotter funny-woman? Yow. And Jason Bateman as her best friend, the one who arranges a little “surprise” when she decides to have a child, in vitro, with sperm donor Patrick Wilson. The ruse isn’t discovered until years later, and in lesser hands, this would have ended up a courtroom drama. But the guys behind “Little Miss Sunshine” and “Juno” know how to make a funny movie. Worth your time.

BATTLE OF THE WARRIORS

A welcome Blu-ray release of this terrific, if overlooked Chinese war-flick, often compared to “Red Cliff” — though it kinda reminds us of a Sergio Leone spaghetti western. Andy Lau and Zhiwen Wang star in the tale of the city of Liang, under siege by a massive army, and the only man who seems capable of turning the tide is a mysterious stranger.

First Blu-ray release of this wonderful ’80s clunker about Ozzie kids who run afoul of bank robbers thanks to a box of walkie-talkies and their new BMX bikes — both cutting-edge toys of the day. But what sets this apart, of course, is that it was the first big-screen appearance (more or less) of then-16-year-old Nicole Kidman, resplendent in her frizzy ’80s do.

Starring Matt Damon and directed by Clint Eastwood, you’d have thought this paranormal, life-after-death disaster flick would have been the smash hit of the summer. But, like all Eastwood movies of the last decade, it’s more of a character study/morality tale, focusing less on action than on the angst that Damon’s ability to the see the afterlife brings him. Hey, an average Eastwood is still better that most anyone else. With spicy French actress Cécile de France (“High Tension”).

NO ONE KNOWS ABOUT PERSIAN CATS

An almost-documentary on what it’s like to be a rock musician in Iran today. No real plot, just a pair of rockers trying to get out of Tehran and into London for a gig and, oh yeah, find a few new band members along the way. With some surprising forays into jazz and a wonderfully goofy, spontaneous, man-on-the-street rap breakdown, this is just plain kewl.

NOVA SCIENCE NOW: HOW DOES THE BRAIN WORK

We have become hopelessly addicted to this PBS series hosted by “the black Carl Sagan,” Neil deGrasse Tyson. Each episode is built around a single question; this episode takes you deep inside the brain and back out again as you learn how you learn. And what you learn is amazing. Did you know, for example, that there are more bacteria living right now in one cubic inch of your colon than all of the people who have ever lived on Earth? Ever?! Get hooked.

If you are a fan of such British PBS treasures as “Are You Being Served?” and haven’t checked out the talent to our north, then you are missing some truly great comedy. The Canadian “Red Green Show” ran for 15 years, poking fun at average guys, especially those who like to hunt or make things with tools. Mr. Green represents the Possum Lodge and delivers much of the narrative in a quiet deadpan that — as people offscreen are losing digits or being torn apart by raccoons — is just plain hilarious. This set contains 47 episodes, from 1997-1999. Recommended.

Very likely the single stupidest thing every made for the SyFy Channel … and that’s a good thing! A for-grins remake of Lamberto Bava’s 1984 “Devil Fish,” this goofy mix of bikini babes, Eric Roberts, bootylicious Shandi Finnessey, Sara Malakul Lane, Roger Corman and — most importantly — a genetically-engineered half-shark/half-octopus, defies all logic, reason or even basic common sense. It’s all played tongue-in-cheek as the monster devours hundreds of (mostly damn good-looking) people in Puerto Vallarta before dying in a big finale. As it should be.

Russ Meyer vets Jack Hill, Tura Satana and Kitten Natividad are just part of the Bad Movie Who’s Who walking through this goofy ode to women-in-prison movies. The real “stars” are scary-hot Geneviere Anderson (“CSI: Miami,” “The Italian Job”) and the scores of naked women who scream obscenities as they are forced to turn tricks by their prison captors. It all ends, of course, in a blood-soaked, titty-slinging free-for-all where the bad guys and gals get butchered while the innocent go … well, there really aren’t any “innocents” here, so let’s just say a good time is had by all.

The two most famous — and notoriously effective — Nazi propaganda films, now available together in an embossed-tin boxed set. Directed by Leni Riefenstahl, these are recognized as two of the most influential films in history, using moving cameras, music and cinematography in ways that sparked a revolution in cinema throughout the world. But they were also designed to sell Nazi Germany as our planet’s natural overlords, distracting the world from their inhuman campaigns of brutality. You’ll never watch the evening news the same way again.