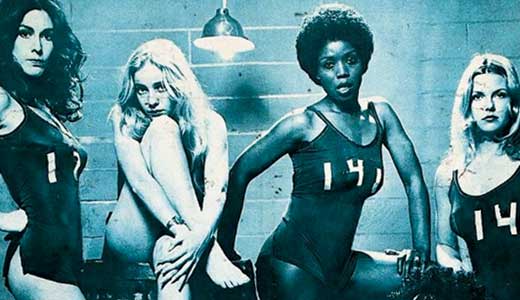 From the “Roger Corman’s Cult Classics” line comes this amazingly entertaining pair of women-in-prison flicks, done as only The Schlockmeister General could do them. “Jail” stars ravishing Yvette Mimieux as a career woman who picks up the wrong hitchhikers and winds up answering to the perverted whims of Southern justice until she’s rescued by … Tommy Lee Jones! With Robert Carradine, Howard Hesseman and Mary Woronov. And what can we say about “Cage Heat”? Written and directed by Jonathan Demme and co-starring Barbara Steele, this remains the greatest (nude) female empowerment movie of all time. A pair of must-owns.

Robert Loggia stars in this infamously cheap, short and rarely seen schlocker from the late ’50s about a mysterious rocket, flying low around the Earth, turning oceans to steam, setting cities ablaze and gobbling up valuable stock footage. Director William Berke dropped dead on the first day of filming, so his son took over and finished the movie, uncredited. From a script by Jerome Bixby.

One-hundred-foot-tall dragons roam the Earth, and ancient secrets hold the key to their fragile coexistence with man. Into the mix is born a half-human/half-dragon boy (“Uh, son, we need to talk …”) in this, Cartoon Network’s first CGI-based series. Directed by Peter Chung.

A nice, dark, low-budget indie shocker from Doug Schulze (remember that name). He shines a light on the town of Perseverance, a cursed place where it hasn’t rained worth a damn in three generations. So how do the farmers keep their crops alive? Trust us, it’s clever and icky. Stars David Carradine in one of his final roles, along with Richard Lynch, Dee Wallace Stone and, from “The Evil Dead,” Ellen Sandweiss.

Yummy Lindsey Shaw stars in this teen sex-comedy based on “Lord of the Flies.” Read that again. A group of high-schoolers are shipwrecked near Mexico, and a battle for survival breaks out between the jocks and the geeks. With Chris Kattan, for some reason.

GAMERA VS. ZIGRA/GAMERA: THE SUPER MONSTER

A great double-feature: the final two movies in the original Gamera canon — and each can be shown subtitled or dubbed! Both are excruciatingly cheap; Zigra destroys no cities, and the monster starts its life as a giant ship before morphing into a big talking fish-thingie. “Super” is almost entirely made up of stock footage and spliced-in sequences from earlier Gamera movies. But if you love that big ol’ jet-powered turtle as much we do, none of that matters.

HOW DO YOU KNOW

James L. Brooks is a writing/directing powerhouse, but his movies can be hit or miss (remember “Spanglish”?). Here he puts Reese Witherspoon, Paul Rudd and Owen Wilson together in the usual rom-com love triangle — with assistance from Jack Nicholson — and asks the titular question. Not the best dramedy of recent years, but watchable and entertaining.

HOW I WON THE WAR

A limited-edition DVD-R release of John Lennon’s only starring role without the rest of the Fab Four, re-edited and restored by director Richard Lester. If you’re already familiar with this black comedy about the absurdities of war, done in the style of Britain’s surreal Ealing comedies, you know it’s not the pinnacle of the filmmaker’s art. Lennon simply didn’t have the acting chops to stand alongside Michael Crawford, and the entertainment value sometimes takes a backseat to the anti-war message and copious newsreel footage. But it’s still a fascinating bit of history and highly recommended for any Beatles fan.

KLUGE IN THE BEGINNING

If you’re a movie fan and don’t know the name Alexander Kluge, here’s a great way to get educated. Kluge was central to the New German Cinema movement of the late ’60s, and this collection features six of his best shorts. Our favorite is “Part-Time Work of a Domestic Slave,” which tells the frantic story of a complex, modern woman: wife, mother, homemaker, abortionist, factory worker and labor activist. Subtitled.

We tend to take our feathered friends for granted. They sing, they fly, and they are the only true survivors from the Age of the Dinosaurs — we poor humans are rather insignificant by comparison. And if you don’t feel that way now, check out this excellent six-disc set from TV’s Nature series, featuring some of the world’s best cinematographers and a cast of millions. Breathtaking.

First Blu-ray release of one of the world’s best films. Based on a story by Stephen King, four young friends — Wil Wheaton, River Phoenix, Corey Feldman and Jerry O’Connell — go on a trek to find the body of a missing teenager in the 1950s. Along they way, they act brainless, bond and confront a band of knife-wielding bullies. Doesn’t sound like much, but this is one terrific flick. Recommended.

Johnny Depp and Angelina Jolie are the only things worth watching in this unbelievable misfire set in Venice, Italy. Yeah, they are stylish and sexy (if a little cheezy in Depp’s case), but the whole “European intrigue with Italian police and Russian hit men” thingie simply gets in the way of their foreplay. Blame writer/director Florian Henckel von Donnersmarck, who was asleep at the wheel from day one. Lots of beautiful scenery (especially Jolie), but otherwise a complete snooze.

A gangs-o-fun actioner from Thailand about a female martial artist/special ops agent who survives a murder attempt only to be thrown into an all-out free-for-all of guns, swords, bombs, Muay Thai and suicidal terrorists. We really liked this! Highly recommended.

Iranian tale of three conscriptees who escape from their forced military training camp, only to be lost in a frozen mountainous hell. A rock-solid and surprisingly light-hearted flick about human relationships and how we simply can’t survive without each other.

Simply awful befouling of a treasured childhood memory. Dan Aykroyd and Justin Timberlake — for no particular reason other than marketing — voice the CGI-animated Yogi and Boo Boo, surrounded by otherwise live performers, not one of whom does anything even mildly entertaining. As flat and lifeless a movie as we’ve ever seen — despite being filmed in 3-D. Aimed at little kids, of course, but even those with us at the theaters were bored out of their skulls. Just say no.