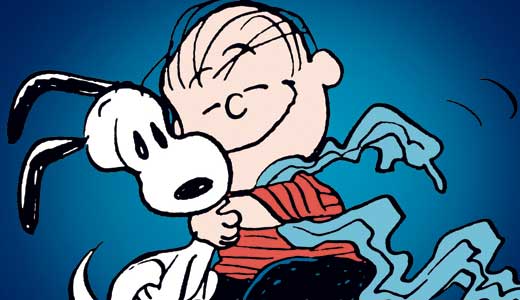 In this all-new Peanuts special, Linus goes berserk, butchers Lucy and buries her body beneath Snoopy’s doghouse when his evil grandma decides to take his precious blanket away. Since the death of Charles Schulz, the producers have taken liberties, finding new voice talent and tackling more “Sesame Street”-ish issues in an attempt to redefine the brand. That’s a shame, because the current roster could never hope to capture the disheveled lightning in a bottle that was “Merry Christmas, Charlie Brown.” Still, a lot of fun, particularly for the wee ones.

The Disney drones prove they can still make an entertaining family film in this, their 50th full-length animated outing. It’s the story of Rapunzel (Mandy Moore), a spunky lass whose flowing locks are a character all their own. She takes on the world after being “rescued” by Zachary Levi and his wonderfully anthropomorphic horse. Constant physical humor, much of it timed to the gong of a cast-iron skillet on someone’s head, and a feisty, fun-loving attitude make this one of Der Mouse’s better achievements of late. Recommended.

Natalie Portman earned an Oscar for making out with Mila Kunis in this artsy-fartsy look at whacko ballerinas. (Hell, we would have done it for a sammich and a tetanus shot.) Lots of critics hailed this as “mesmerizing,” “haunting” or “devastating,” but to us, it was like meeting a honey at the Z-Bar: smokin’ hot, but with enough makeup to scare a Masai warrior. Portman does a great job, as always, playing a dedicated dancer who goes off the deep end. Recommended.

A truly frightening doc on colony collapse disorder, the scourge that is decimating North America’s bee population, without which 90 percent of our crops cannot survive. Uh, that means we will all starve to death. Soon. Not joking. Follows two neophyte beekeepers at the forefront of the battle against CCD.

Now available on Blu-ray, Francis Ford Coppola’s big-screen directorial debut, and one of the best cult horror classics ever made. When her husband croaks, Luanda Anders finds herself trapped in a rotting Irish castle with her subhuman ex-in-laws and an axe-wielding psychopath. Lots of nudity, gore and suspense, all filmed on borrowed sets with borrowed actors, courtesy of Roger Corman. With Patrick Magee as the family doctor who tries to save the day. Simply wonderful. Our highest recommendation.

Why isn’t this still in theaters? Naomi Watts and Sean Penn star in the real-life tale of CIA officer Valerie Plame, “outed” by the Bushies in retribution for a newspaper article written by her husband (Penn), which put her and all her contacts in mortal peril. One of the best-written, best-directed and best-acted films of recent years.

One of those wonderfully imaginative, no-budget indie dramas populated by some of the almost-great actors we love so much. This one stars Dina Meyer, Vincent Spano, Lea Thompson, Lela Rochon and Ernie Hudson in a chick-flick plot about a woman (Meyer) confronting a mysterious man who is manipulating her life. Lots of fun.

Beyond the simple scientific miracles revealed by the Hubble orbiting telescope, there is indescribable beauty. You can’t help but be in awe of the majesty and splendor found everywhere throughout the heavens as the Hubble lets its magical eye wander the infinite. And a small portion of that wonder is captured here in this offering, originally shown in IMAX. Prepare to be amazed.

One of the most popular crime sagas ever shown in Europe, the true tale of Jacques Mesrine, a 20-year career criminal who openly killed, robbed and kidnapped in between multiple escapes from prison. Told in two parts, it stars Vincent Cassel, Cécile De France, Gérard Depardieu, Roy Dupuis, Gilles Lellouche and lovely Ludivine Sagnier, with Mesrine coming to a bloody end in a war-like police shootout in the middle of Paris in 1979. (Be careful to purchase Region 1 discs, as some of the two-part sets will not work in American players.) Recommended.

Don’t recognize the name “Lalo Schifrin”? How about the theme song to “Mission: Impossible”? Schifrin wrote that, as well as a score of other famous themes when not performing or recording with jazz great Dizzy Gillespie. Or Plácido Domingo. Or the London Philharmonic. An excellent and entertaining look at one of the most gifted musicians, composers and conductors of any age.

A welcome, restored nugget from the late-grindhouse era with Leslie Uggams suffering every civilized person’s secret nightmare: to be stranded in a back-road redneck hell with no one to turn to for help. Co-stars Shelley Winters (who always scared the crap out of us), Michael Christian, Slim Pickens as the sheriff, Ted “Lurch” Cassidy, Dub Taylor and a host of other superb character actors. A truly sordid, icky and effective psycho-thriller that has been seen only by serious film collectors and demented cult junkies for decades. Our highest recommendation.

THE GOOD WAR AND THOSE WHO REFUSED TO FIGHT IT

A sobering documentary, narrated by Ed Asner, about the American conscientious objector movement of WWII. At a time when our country was lost in a planet-wide frenzy of patriotic killing, a few courageous nonconformists refused to surrender their humanity. Worth your time.

The first Gilbert and Sullivan title to be filmed for the big screen, as performed by the legendary D’Oyly Carte Opera Company and directed by Oscar-nominated filmmaker and musician Victor Schertzinger (“Road to Singapore”), this silly Limey satire on love and politics in the Orient stands as one of the most entertaining and frequently performed tales ever written. A rare and wonderful movie, now available in a Criterion/Blu-ray edition. You’ll thank us.

Considered by many to be the finest hours of TV ever made, now available in a complete boxed set. Jean Marsh leads the all-British cast in this tale of the Bellamys, a wealthy aristocratic London family, and their variably loyal servants as they all endure scandal, social change, loss of fortune, politics and WWI with equal measures of stiff-upper-lip, humor, grace and foolishness. All five seasons and lots of great bonus goodies.