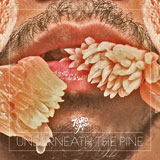 Two years removed from the backlash-ready chillwave blitz, Toro Y Moi proves the best way to transcend hype is to have the songwriting chops to match it. Chaz Budnick’s melodies have a narcotic warmth that sustains Underneath the Pine, even as the album gets same-y in its second half. Budnick occasionally goes overboard with the blissed-out harmonies, but amidst all the layering, there are some seriously great songs here — “New Beat” one-ups Chromeo, gliding like a Rod Temperton Thriller outtake beneath Budnick’s aloof vocals, while the luminous instrumental “Divina” floats languidly over bass and drums straight out of Histoire de Melody Nelson. Elsewhere, “How I Know” adds some surprising urgency without disrupting the album’s easygoing flow. Despite its terrible cover art, Underneath the Pine is a winner that guarantees we’ll be talking about Budnick long after the hype machine that spawned him has faded into history.